The authorities moved to send over 500 riot police reinforcements to the islands to deal with the protests, prompting more clashes as islanders tried to prevent the arrival of the ferries. 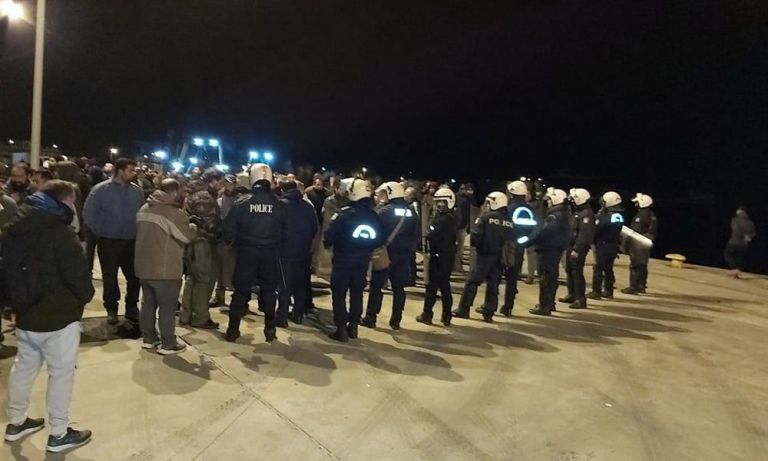 Police in riot gear threw teargas and fired water cannon at Greek islanders as they tried to prevent access to construction sites for new migrant detention centers by setting fires, hurling flares and blockading the gates.

Locals on Lesbos and Chios are worried that the centers, which would replace temporary camps with open access, will leave the islands permanently overcrowded.

Vowing to press on with the building work, authorities say closed centers will offer greater public safety and limit potential health risks, particularly given the potential spread of the coronavirus in other countries.

“It is clearly evident that matters such as the coronavirus can be dealt with swiftly and effectively in a closed facility and not an anarchic, open facility which is a health time bomb,” government spokesman Stelios Petsas said.

The spokesman did not clarify any particular logical link between the threat of the prospective spread of the virus and the thousands of refugees and migrants crowded in the Moria camp, and how closed detention centres would limit the supposed threat.

The authorities moved to send over 500 riot police reinforcements to the islands to deal with the protests, prompting more clashes as islanders tried to prevent the arrival of the ferries.

Condemning what he called a “day of shame”, Costas Moutzouris, governor of the northern Aegean region, branded the deployment “extremely aggressive” and announced a decision by local authorities there to hold a 24 hour general strike on Wednesday against the actions of the central government, the Athens News Agency reported.

Witnesses said about 500 people attempted to block the unloading of heavy machinery overnight to break ground at the construction site on Lesvos.

Clashes between protesters and police broke out and fires burned on the streets and in the roadside brushland, ignited by the flares. Similar tensions were reported on Chios, where residents also say they are bearing the burden of the refugee crisis.

In addition to Lesvos and Chios, Greek authorities plan to construct closed detention facilities on Samos, Kos and Leros. The islands are close to Turkey, from where thousands of asylum seekers head to Europe each year.

Hundreds of thousands of people crossed into Europe from Turkey via Greece in 2015 and 2016 before a deal brokered by the European Union limited the flow. There has, however, been a resurgence in arrivals since September 2019.

The conservative government has taken a markedly tougher stance towards migration compared to the previous leftist government, issuing a tender for the construction of a floating fence to deter asylum seekers arriving by sea and introducing faster processing procedures that could increase deportations.

TANEA Team 26 Φεβρουαρίου 2020 | 17:23
Share
Δείτε επίσης
Περισσότερα άρθρα για Αγγλική έκδοση
The crisis presents an opportunity but time is of the essence Editorial: Everyday life
Malicious Manzano: A «massacre» for Olympiacos in Velodrome
Editorial: Merkel's disappointment
There is, a pressing need for the state to meet the disaster relief standards that the PM has set Editorial: Accountability
High anxiety in government over potential COVID-19 super spreader event in Patras
Today Greece has the opportunity to draft its own economic roadmap for the future Editorial: Challenge
Marinakis: «The result was clearly distorted – Dräger was fouled before the goal»
It is behind closed doors that the harshest stories of violence against women are hidden Editorial: Silence means sharing the guilt
Fourteen ICU beds, donated by Evangelos Marinakis, Angeliki Frangou and ION S.A. ready for use
SYRIZA in fact was not so eager to create a common front with the left Editorial: Political flirt
It is not too much to ask our political parties to adapt to the new realities Editorial: Time to build consensus
Any back-pedaling on the public health restrictions that have been imposed would be catastrophic Editorial: No to complacency!
Politicians can visit the historic Athens Polytechnic campus to leave a flower, as the PM suggested, or to lay a wreath as the main opposition leader proposed. Editorial: The cost
Perhaps the government could have handled the matter earlier and differently Editorial: Lives must be saved
We must deprive Turkey of its strongest weapon – the element of surprise Editorial: Equation