Naturally, democracy must prevail but that presupposes fair and free elections and respect for the popular will. 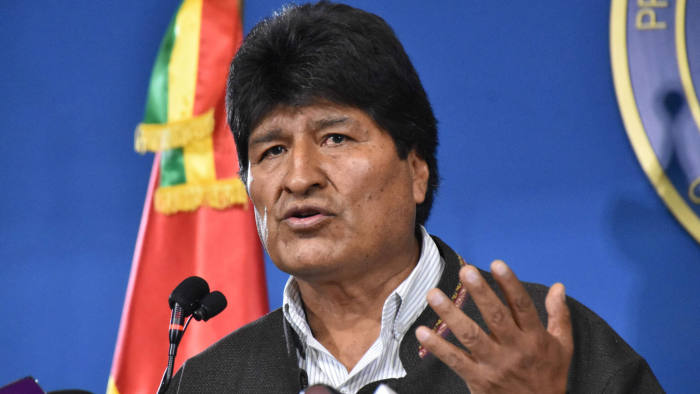 Evo Morales did much to benefit his country during his 14 years in power.

He reduced poverty by two-thirds. He nearly doubled the minimum wage. He achieved an average growth rate of five percent. He reduced inequalities. He bolstered the position of aborigines.

A few years ago, international financial institutions described the country as a model for Latin America even though a hardcore socialist was in power.

The first aborigine to become president of Bolivia, however, was enamoured of power and decided to seek a fourth term, thus violating the constitution and the result of the 2016 referendum.

Last month, he declared himself the winner of an election marked by widespread ballot-tampering.

Meanwhile, the economic miracle had begun to fade. Revenues from the export of natural gas were dramatically reduced, and the fires set in the forests of the Amazon to satisfy China’s need for beef and soya was not strategically successful.

People took to the streets and some were killed or injured.

When the army withdrew its support, Morales knew that the end had come.

Consequently, former PM Alexis Tsipras’ tweet expressing solidarity “with Morales and the people of Bolivia” was at least simplistic, as the interests of the two no longer coincide.

Naturally, democracy must prevail but that presupposes fair and free elections and respect for the popular will.

The leader of SYRIZA cannot understand this. He was always an admirer of Castro and still supports Maduro. In general he is fond of perpetual leaders, but Latin America is changing.

Φορολοταρία : Έρχονται αλλαγές – Το σχέδιο του υπουργείου Οικονομικών
TANEA Team 12 Νοεμβρίου 2019 | 23:26
Δείτε επίσης
Περισσότερα άρθρα για Αγγλική έκδοση
Editorial: Pillar
Editorial: Crisis
Government and opposition are skirmishing over the rubble in Mati Editorial: Duty
As it turned out Mega was too big to die Editorial: The return of Mega Channel
The government cannot address the problem of school violence on its own Editorial: Wave of violence
Job creation is the overarching aim so that society can prosper Editorial: Automatic pilot
Right now there must be delicate diplomatic manoeuvres abroad and a solid front domestically Editorial: Consensus
Editorial: Delusions
Editorial: Readiness
It seems that freedom of speech cannot be taken for granted in our country Editorial: Fascism
At last it seems that reason is prevailing over belief and superstition about vaccines Editorial: Sirens
Dialogue must continue to be a basic pillar of Greek foreign policy Editorial: Dialogue
SYRIZA links Oruc Reis incident to Turkey's disputation of Greek sovereignty over Aegean islets
The state is obliged to determine which groups are serving humanistic ideals and which are simply exploiting human misery Editorial: Investigation
Electronic prescriptions a much-needed push toward digital modernisation