Pyatt in a very upbeat tweet said the Ross-Georgiadis meeting touched 'on plans for government reforms that will attract more US investment'. 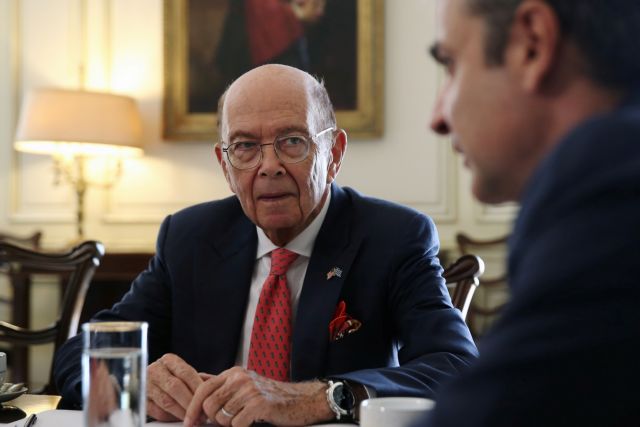 Development and Investment Minister Adonis Georiadis today outlined Greece’s development programme and the government’s hopes for major US investment in talks with a high-level US delegation headed by US Commerce Secretary Wilbur Ross and with US Ambassador to Athens Geoffrey Pyatt in attendance.

Ross and the US delegation expressed an intense interest in the huge Ellinikon development project which for years has been mired in bureaucratic delays.

“The meeting went very well. I thank my associates and especially the deputy ministers who were well prepared to answer all the questions of US delegation and of Mr. Ross,”Georgiadis said.

“We outlined the economic development plan that we are preparing and the US delegation was enthused, and they said that the initiatives of the Mitsotakis government can transform the country, and that the time has come for serious US investment in Greece. Hence we believe that it was a very important meeting,” Georgiadis said.

Pyatt in a very upbeat tweet said the Ross-Georgiadis meeting touched “on plans for government reforms that will attract more US investment”, and he stressed the keen US interest in “the Hellenicon project, upcoming privatisations, and the work of our bilateral trade and investment working group”.