After hard work we passed into the Groups. We are especially glad and proud,” Marinakis declared 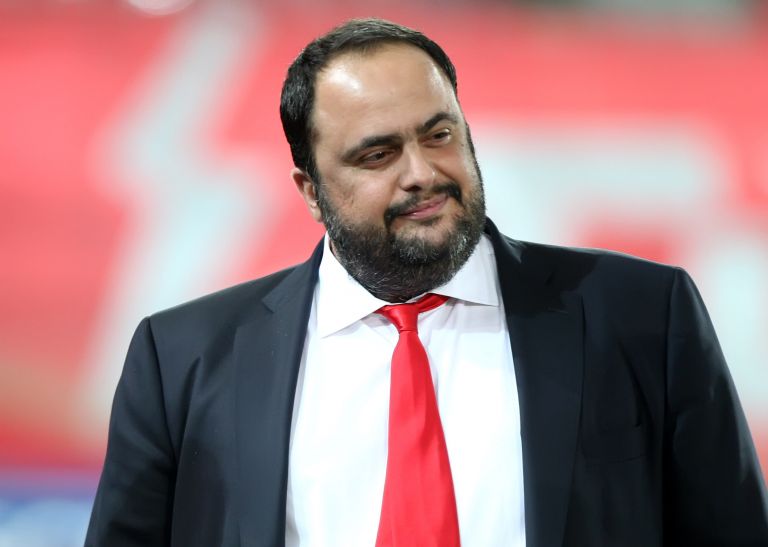 Olympiacos FC emphatically qualified in the group stages of the Champions League and was drawn in Group B where it will play against great European teams such as Bayern Munich, Tottenham, and the dangerous Red Star.
The leader of Olympiacos, Vangelis Marinakis, told a subscription channel that he welcomes the fact that the Piraeus team Olympiacos was drawn and said the team’s presence in the Groups vindicates the efforts that the players, the techical team, and the club’s management have made all this time.
The strongman of Olympiacos stressed that the challenge for the Red-and-Whites will be quite difficult but that everyone believes in the team’s capabilities and are optimistic that it can meet the challenge.
“I love uphill climbs,” Marinakis declared, citing the great Greek novelist Nikos Kazantzakis.

Olympiacos’ participation in the Groups

“Certainly it is a great vindication for all of us – for management, the players, and the coach. After hard works we passed into the Groups. We are especially glad and proud,” Marinakis declared.

As regards Petr Cech’s remark that Olympiacos is a traditional power house Marinakis stated, “In the last nine years we have managed to distinguish Olympiacos in the upper echelons of European football. We are very proud of that because it took a lot of effort,” Marinakis said.

“Nikos Kazantzakis has explained magnificently why one must not avoid uphill battles. I love uphill climbs. We like difficult challenges. Bayern and Tottenham are great teams as are our brothers on the Serbian team. We believe in our capabilities. We shall be strong. We are optimistic,” the Olympiacos FC leader said.
Football player transfers
Regarding football player transfers Marinakis said, “We have already begun today with Yasine Benzia.Tomorrow, you will see the next player, Maximiliano Lovera. Yet we also have tremendous faith in our current players. They are the best in our country and brought us to this point. They will be leaders in European football as well,” Marinakis declared.

“Names have been bandied about. You manage to publicise them in a timely manner. Benzia is already in Greece and our next player is arriving tomorrow. However, we love and trust all our players and we will do well,” Marinakis said.
On AEK and PAOK
“I honestly want PAOK and AEK to qualify. It would be good for the country. We are Greeks and our skirmishes notwithstanding Greece should move forward. I wish them good luck and the best possible result,” Marinakis concluded.

TANEA Team 29 Αυγούστου 2019 | 20:20
Share
Περισσότερα άρθρα για Αγγλική έκδοση
Approximately 160,000 people in Greece today are afflicted with Alzheimer’s disease Editorial: Reminder
Unrepentant, Tsipras unleashed charges against the government and announced handouts Editorial: A return to the past
The country is in great need of stability., not electoral surprises Editorial: Normalcy
The EU’s adjustment of financial rules has facilitated the situation Editorial: Lessons
Editorial: The conundrum of early elections
It is common knowledge that all political parties seek the vote of Greece’s youth Editorial: Greece’s youth
In a democracy, elections cannot serve as a weapon for prime ministers Editorial: The need for electoral stability
Mitsotakis rules out any prospect of political consensus with SYRIZA
Merkel’s statement should lead us collectively to a rethinking of what happened and not reflexive indignation Editorial: The price of imprudent politics
Self-tests, contact tracing key to safe re-opening of schools Spike in COVID-19 cases expected after schools open next week
The repercussions of these illegal actions are not limited to public health Editorial: A threat to society
September has arrived, but the University Protection Groups did not keep the rendezvous Editorial: Rendezvous
Theodorakis exemplified the sacred and mystical marriage of music and poetry The Greek nation bids farewell to beloved composer Mikis Theodorakis
One must be very careful in making choices that will influence the education of future generations Editorial: The time has come for a bold ‘yes’
Hellenic Statistical Service Staikouras for GDP – Strong recovery confirmed