The talks came amidst heightened tensions between the Republic of Cyprus and Turkey, which is conducting illegal drilling for hydrocarbons in Cyprus’ EEZ. 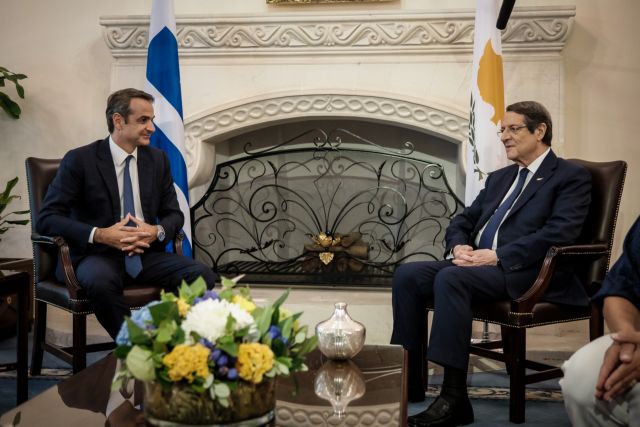 Prime Minister Kyriakos Mitsotakis on his first trip abroad as PM held talks today with Cyprus’ President Nicos Anastasiades and the two leaders confirmed that they will pursue Cyprus settlement talks on the condition that Ankara ceases its illegal drilling in the exclusive economic zone (EEZ) of the Republic of Cyprus.

Anastasiades underlined that this requires the active support of Turkey in order to secure the rights of both Greek-Cypriots and Turkish-Cypriots.

The talks came amidst heightened tensions between the Republic of Cyprus and Turkey, which is conducting illegal drilling for hydrocarbons in Cyprus’ EEZ.

The EU has slapped sanctions on Turkey over its violations of the sovereignty of member-state Cyprus and the US has issued repeated stern warnings all of which Ankara has ignored.

Anastasiades thanked Mitsotakis for Greece’s staunch support for Cyprus internationally and underlined that both countries stand firmly in their support for the enforcement of international law and for the rights of an EU member-state.The Cypriot president said that, “With particular satisfaction we hail the EU’s palpable solidarity.”

Anastasiades also underscored the crucial importance of existing trilateral cooperations in the Eastern Mediterranean, the most important of which is the Cyprus-Greece-Israel axis, noting that their aim is the “the full exploitation of future prospects, especially in the energy sector” and entails no designs against Turkey.

Anastasiades stressed that a Cyprus solution must have neither victors nor vanquished and must ensure the functionality and viability of the state, as well as the human rights of all legal citizens of Cyprus, without excessive privileges for one side at the expense of the other.

Anastasiades said that he discussed with Mitsotakis ways to confront Turkish provocations in Cyprus’ EEZ.

“We the Prime Minister we share the common conviction that a restart of Cyprus settlement talks requires an active contribution from Turkey to creating a suitable climate with the cessation of illegal activities in Cyprus’ EEZ but also as regards plans pertaining to the fenced off city of Famagusta,” Anastasiades said.

For his part, Mitsotakis said that the paramount concern is the end of the Turkish occupation of Cyprus.
He expressed his satisfaction over Anastasides’ forthcoming meeting with Turkish-Cypriot leader Mustafa Akinci.

“A settlement is inconceivable without a withdrawal of Turkish occupation troopsfrom the island,” Mitsotakis said.
“Cyprus will have the support of Greece and the EU in any escalation of energy-related provocations,” Mitsotakis declared.

He also stressed the importance of existing trilateral regional cooperations.