'Today we Greeks have a duty to honour our highest right as citizens. We are taking the fate of Greece in our hands and we are choosing the future of our children,' Marinakis said. 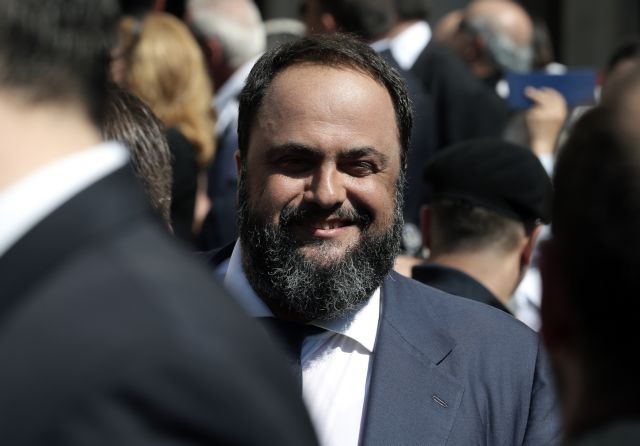 Olympiacos FC leader and Piraeus City Councillor Evangelos Marinakis, who received the most votes in the recent municipal elections, told journalists after casting his vote today that,“A new day is beginning for the Greek people and all together we shall try to make a new Greece in which the sacrifices of the Greek people will be vindicated”.

“It is a day that takes us away from lies, hypocrisy, hatred, from a sell-out of our country, of national treachery, and all that which kept us back and has placed us and our children in debt for the coming years,” Marinakis said.

“A new day is beginning for the Greek people, a day far from lies, hypocrisy, hatred, complexes,audacity,and a sell-out of country – many things which took us years back and left the bill for us and our children for the coming years,” he said.

“I believe that all together – neither the many nor the few – we will have a new beginning and will try to make a new Greece which will reward the sacrifices of the people. We will see the Greece of courage, honour, and all that we dream of for our own and our children’s future.”

On the eve of the election Marinakis lashed out at the outgoing SYRIZA government.

“Today we Greeks have a duty to honour our highest right as citizens. We are taking the fate of Greece in our hands and we are choosing the future of our children. That is why no one should be absent from today’s call of democracy. Our country as of tomorrow will make a definitive break with lies, iniquity, dangerous populism, treachery, the sell-out of country,the degradation of institutions, scandals, enormous political audacity, hatred, the predominance of petty partisan interests, and remaining in office at any cost The outgoing government and Alexis Tsipras personally is responsible for this because he and his associates executed a plan of absolute degradation of the sacrifices of the Greek people and of our democratic traditions, as well as our diachronic mores and ideals.” Marinakis declared.

“More mature than ever and having learned from the errors of the past and cognisant of the true dilemmas of the elections and not the falsehoods we have heard recently, we must tread the path of creativity and responsibility. We must look each other in the eye and set aside the divisive mentality that they tried to imbue in us and seek once again our common values and create the fate that we deserve, without false, grand rhetoric that disappears the day after the elections. We must work not for the many or the few but for all Greeks,” Marinakis stated.

“I call upon my thousands of friends in Piraeus and throughout Greece with whom we have waged so many victorious battles – and on every Greek woman and man individually – to go en masse to tomorrow’s election and send a resounding message of unity, creativity, stability, security, and progress. We must send a message about the Greece of pride, courage, and honour and about the Greece of growth, work, and compensation for the toli and sacrifices of its people,” Marinakis declared.

TANEA Team 7 Ιουλίου 2019 | 16:47
Share
Δείτε επίσης
Περισσότερα άρθρα για Αγγλική έκδοση
European supervised drug consumption sites have been an inextricable part of drug treatment Editorial: The first step
The overturning of Roe v. Wade turns the clock back 50 years for American women. Editorial: Back and forth
Thymios' statement - “I no longer trust people.” – is a punch in the gut. Editorial: A punch in the gut
Editorial: Audits of politicians' wealth
Mario Draghi has a prominent position in the EU architecture Editorial: Alliance
After a certain point, the necessary caution is a matter of personal responsibility Editorial: COVID-19 and personal responsibility
Extremists still constitute a threat Editorial: Threat
A consciously responsible stance is needed Editorial: Maintaining COVID-19 alertness
The late PM Constantine Karamanlis famously said, 'We belong to the West' Editorial: Contradictions
The end of EU enhanced fiscal supervision signals the exit from the tunnel Editorial: Breakthroughs
Head of Greek Pomaks’ Association rips into Erdogan’s revisionist expansionism
All Greek governments since Andreas Papandreou's demanded the return of the Marbles Osborne: ‘Deal to be done’ on sharing Parthenon Marbles
All efforts toward a radical resolution of the refugee problem have failed Editorial: The end does not justify the means
France's centrist forces are rallying behind President Emmanuel Macron Editorial: The political centre
The Germans are returning, this time not to impose their will but to cooperate Editorial: Greece as a bridge between Western Balkans, EU