'Mr. Mitsotakis is now telling us ‘Mitsotakis or chaos.’ He is crudely blackmailing the Greek people but they are not buying it. They want political stability and not adventures,' the Movement for Change leader declared. 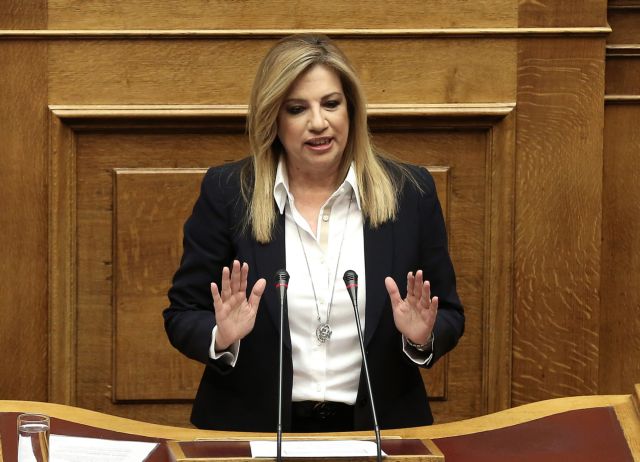 Centre-left Movement for Change leader Fofi Gennimata has unleashed a frontal attack against main opposition leader Kyriakos Mitsotakis over his warning that if New Democracy does not receive a strong mandate in the 7 July general election then the country will be led to a second parliamentary election in August, in the middle of most Greeks’ summer vacation.

“Mr. Mitsotakis is now telling us ‘Mitsotakis or chaos.’ He is crudely blackmailing the Greek people but they are not buying it. They want political stability and not adventures. They want a strong Movement for Change as a progressive counterweight to the danger of an uncontrollable right-wing (government),” Gennimata declared in a campaign speech in Patras.

“On 7 July we have a rendez-vous with progressive citizens at the ballot box. Do not forfeit your progressive identity. A vote for the Movement for Change is a useful vote,” she added.

The attack comes straight on the heels of Gennimata’s political sea change.

Whereas for months she adamantly ruled out entering any coalition government after the elections, as she said her party would not be a “crutch” for either SYRIZA and New Democracy, in the last few days she has said that the Movement for Change is prepared to choose the path of the so-called “tolerance vote”, allowing the first party to get a confidence vote in Parliament and to govern.

It is highly uncertain that Mitsotakis would accept such a fragile solution, although a number of prominent Movement for Change MPs in recent days have intimated that the party could conceivably even enter a coalition in order to ensure political and economic stability.

A party offers a tolerance vote when it declares to the Speaker that it will abstain from the confidence vote.

Gennimata was responding to Mitsotakis’ stark ultimatum to the electorate that the only path to political stability is a strong parliamentary majority for ND.

“If for any reason a government cannot be formed after the 7 July election, then the country will ineluctably again head to elections in mid-August. Citizens should understand well what it means not to have a strong mandate on the night of 7 July,” Mitsotakis declared.

“Of course, (the country) will be led to elections in mid-August with a proportional representation system. That means de facto that the only kind of government that can be formed and which I cannot conceive of is a government of – shall we call it national understanding? – where essentially the first and second party will have to reach an understanding,” he added.

“If that is what Greek citizens want, then obviously should not give us a strong mandate.”

Παγκόσμιες συγκρούσεις αναμένει το Ρωσικό Συμβούλιο Διεθνών Σχέσεων – Τι αναφέρει σε έκθεσή του
TANEA Team 28 Ιουνίου 2019 | 17:05
Δείτε επίσης
Περισσότερα άρθρα για Αγγλική έκδοση
The president-elect of Greece has won people over even before assuming office Editorial: Modesty
Marinakis just dealt the final blow to the so-called ‘clean-up’ of Greek Football in front of UEFA/FIFA
The dialogue Marinakis to Grammenos: «You have been doing anything that Savvidis was telling you for such a long time and now you’ve become sensitive?»
President-elect Ekaterini Sakellaropoulou symbolises Greece’s passage to a new era with greater consensus and less toxicity Editorial: A victory for democracy
'Our country is governed by the rule of law and is a force of stability, growth, and culture' President-elect Sakellaropoulou to focus on defending rights, sovereignty
Turkey’s provocations are non-stop Editorial: Audacity
Hospitals should not be excluded from public-private partnerships Editorial: Partnerships
The government in Tripoli has said that Greece 'has nothing substantial to offer'. Haftar in Athens, Greece to veto EU approval of Libya peace deal if MOU with Turkey not canceled
The nominee has the prestige and wherewithal to serve the office in a worthy manner Editorial: Consensus
The last president who was not a politician was Christos Sartzetakis who served between 1985-1990 In historic move, Mitsotakis taps Council of State chief to serve as first woman president
Realism at all levels and in every way must be the only guide Editorial: Realism
Greece cannot be punished ad infinitum for the errors of the past Lower primary surplus targets key to Greek economic growth
Indian slaves swap life of bondage for seat in boardroom at tea plantation
Editorial NEA: Puzzle
EU resumes probe into Boeing-Embraer deal, sets new April 30 deadline