It is absolutely necessary to tone down the rhetoric and to not give the impression that Ankara’s sabre-rattling can influence Greek domestic politics. 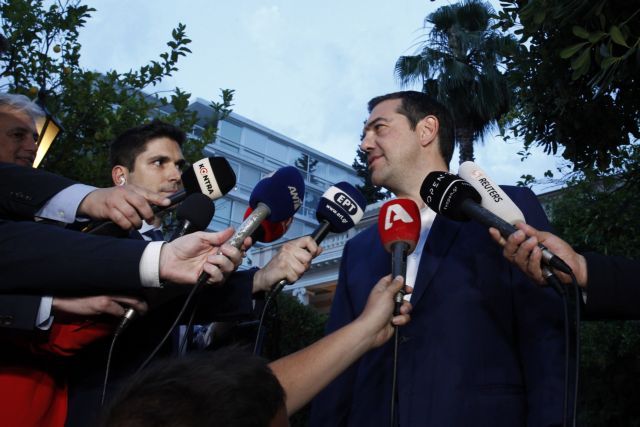 Judging from his initial reactions, the PM appears to be succumbing to temptation.

He appears to believe that this is his last card before the 7 July parliamentary elections and that a crisis can rally citizens around him and his government.

The PM’s political interest, however, is not identical with that of the country.

It is absolutely necessary to tone down the rhetoric and to not give the impression that Ankara’s sabre-rattling can influence Greek domestic politics.

Greece and Cyprus both have strong alliances internationally. These were not forged over the last four years as the PM would have it but rather are the result of critical choices made by previous Greek governments.

The paramount concern of the current government must be not to let an issue involving exploitation of energy resources turn into a Greek-Turkish clash.

It must not use this issue to serve its political and partisan objectives even if that is this government’s last temptation.

Αρχηγός ΓΕΕΘΑ : Βασική αποστολή μας η «προς πόλεμο προπαρασκευή»
TANEA Team 19 Ιουνίου 2019 | 01:20
Δείτε επίσης
Περισσότερα άρθρα για Αγγλική έκδοση
Turkey’s provocations are non-stop Editorial: Audacity
Hospitals should not be excluded from public-private partnerships Editorial: Partnerships
The government in Tripoli has said that Greece 'has nothing substantial to offer'. Haftar in Athens, Greece to veto EU approval of Libya peace deal if MOU with Turkey not canceled
The nominee has the prestige and wherewithal to serve the office in a worthy manner Editorial: Consensus
The last president who was not a politician was Christos Sartzetakis who served between 1985-1990 In historic move, Mitsotakis taps Council of State chief to serve as first woman president
Realism at all levels and in every way must be the only guide Editorial: Realism
Greece cannot be punished ad infinitum for the errors of the past Lower primary surplus targets key to Greek economic growth
Indian slaves swap life of bondage for seat in boardroom at tea plantation
Editorial NEA: Puzzle
EU resumes probe into Boeing-Embraer deal, sets new April 30 deadline
Trump praises Greek economic progress at talks with Greek PM, avoids mention of Turkey, Libya
Editorial: Threats
From the signing of an agreement to its implementation the distance is never small Editorial: Message of Peace
The country that is ever more isolated is not Greece but Turkey Editorial: Advantages
The political system is facing Turkish provocations united Editorial: Unity