'I did not and do not have ties with the public sector. I did not intertwine my interests with a party and politicians in order to hugely enlarge my business. My business is abroad. I serve Greece in global shipping,' Marinakis said about Sokratis Kokkalis. 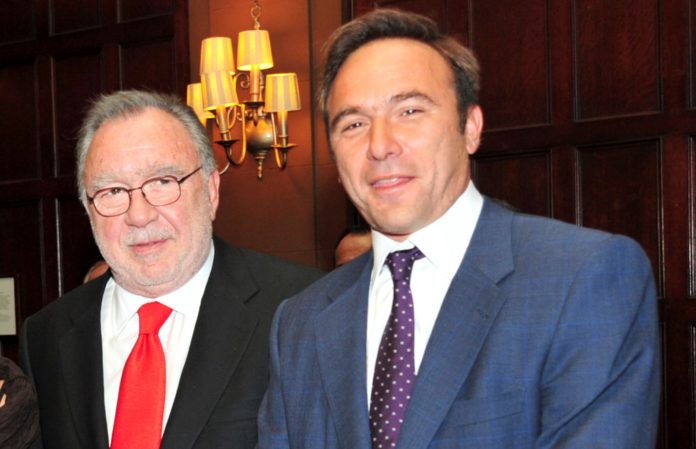 Asked about Petros Kokkalis (now a European Parliament candidate on SYRIZA’s ticket) and his relationship with his father, Sokratis, Marinakis offered his account of why the father and son are not on good terms.

He spoke of the dark alleyways of Greek football and maintained that Kokkalis “gave” businessman Thomas Mitropoulos (who has had a sketchy course in Greek football) to PAOK FC owner Ivan Savvidis and to AEK owner Melissanidis in order to harm Olympiacos.

Marinakis also spoke of the electoral collaboration between the ruling SYRIZA party and Kokkalis.

Marinakis played down talk of tensions with Petros Kokkalis, who has given a spate of interviews in which he has dropped barbs against  Marinakis. Both were elected on Mayor Yannis Moralis’ ticket as members of the Piraeus City Council and Kokkalis resigned his seat recently in order run in the elections.

“There is no dispute and there is no reason for me to run around to television and radio stations to accuse him. I do not want to talk about it. It is without merit. (Petros Kokkalis) was with us (on the City Council ticket) because his father requested this so that he could have something to do. He had failed both in his father’s businesses and in Olympiacos FC and in the amateur Olympiacos team, where he left a debt behind. I have nothing to say to him,” Marinakis said.

The shipowner also spoke about his relationship with Sokratis Kokkalis.

“The only thing we have in common is my succeeding him (as owner of) Olympiacos FC.  I did not and do not have ties with the public sector. I did not intertwine my interests with a party and politicians in order to hugely enlarge my business. My business is abroad. I serve Greece in global shipping. Since the summer of 2010 Olympiacos has paid over 150mn euros in taxes and insurance contributions to the state.

“Without special payment schedules and without delay we pay what the football club owes to the Greek state, without my having any business with the public sector. When we took over Olympiacos had a debt of 60mn euros, huge economic problems, and a crumbling infrastructure. Sokratis Kokkalis himself was not disposed to lead the club out of the impasse. At the drop of a hat I invested 60mn euros, and in the first year we won the championship with everyone stacked against us. It was a year when Panathinaikos FC was all-powerful and had just won the double,” Marinaksi said.

“On Tsipras’ and SYRIZA’s watch Sokratis Kokkalis’ companies have received huge sums of money. He is also in a tight embrace with Dimitris Melissanidis through Intralot and OPAP (betting companies) and also Agia Sofia (the new AEK FC stadium). It is known that he offered the services of Thomas Mitropoulos to Melissanidis and prior to that to Ivan Savvidis. Thomas Mitropoulos and his entourage caused us enormous problems and we paid for that. For some people money and personal interests rule as king. I am always honest with Olympiacos’ people. Everyone must understand that Olympiacos is above money, politics and interests,” the football club owner concluded.

TANEA Team 18 Απριλίου 2019 | 16:36
Share
Δείτε επίσης
Περισσότερα άρθρα για Αγγλική έκδοση
A businessman has the right to bar entry to his or her establishment of unvaccinated people Editorial: Reaching an understanding
Editorial: Privileges
The NATO Summit is bound to be newsworthy as it is Biden’s first Editorial: Lines
The government must ensure that the path toward modernisation will begin. Editorial: Changes
Covid free Kythnos island – 100% of the population vaccinated
Tourism minister in the Netherlands
There are strikes, like the one at the port, held just for the sake of declaring them Editorial: Conceptions
Ideally, we should fashion a new social and economic model for Greece Editorial: Model
The government must urgently undertake necessary initiatives to root out organised crime Editorial: Root out organised crime
COVID-19 vaccines and immunity: We are not among the lucky ones
Our era requires balances, seriousness, planning, and of course to defend one’s red lines Editorial: A coordinated foreign policy
The Turkish Foreign Minister confirms that the big goal is to convene a Mitsotakis – Erdogan meeting Exclusive Interview TO VIMA – Mevlut Cavusoglu: The “keys” for a solution
Fear could lead to slowing down the pace of appointments in the vaccine rollout Editorial: Choices
In our age, references to international law seem cliché or even something of a joke Editorial: Red lines of democracy
The UGS’s position on the recent statements made by Mr. Panos Laskaridis