The more cynical among the government’s critics say that the placement of the statue aims to temper the huge backlash after the Prespa naming Agreement last year, which has decimated support for the ruling party in northern Greece 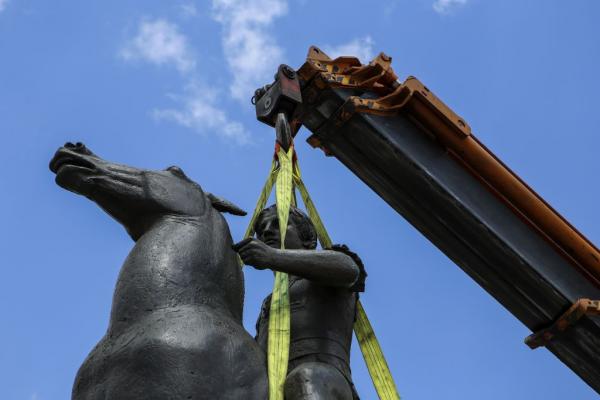 Nearly three decades after it was finished by Yannis Pappas, one of the greatest Greek sculptors of the 20th century, a bronze equestrian statue of Alexander the Great has finally been installed in central Athens near the Zappeion, very near Syntagma Square and even closer to the columns of the Temple of Olympian Zeus.

Workers of the Municipality of Athens today quickly placed the equestrian statue on a black granite base – with Alexander’s name on one side and the sculptor’s on the other - after a long period of remodeling of the surrounding area and just before the beginning of the tourist season, as the area is a hub for tourist buses.

The statue is 3.45 metres in height and 3.8 metres in length. Alexander bears no arms and is depicted at a very young age.

Pappas died in 2005 and so he never saw his work installed in Athens. For years it had been resting in his garden, which he bequeathed to the Benaki Museum.

The more cynical among the government’s critics say that the placement of the statue aims to temper the huge backlash after the Prespa naming Agreement last year, which has decimated support for the ruling party in northern Greece

The statue came to the fore in the early 1990’s at the height of the crisis over the Macedonian naming issue but Pappas began designing the statue in 1941 and the casting was done in 1973.

It was placed on display in the National Gallery in 1992 in a Pappas retrospective exhibition – at the start of the Macedonian naming crisis - and not long afterwards it was purchased by the Greek state, when Dora Bakoyannis was serving as culture minister in the government of her father, Konstantinos Mitsotakis.

Some believed the delay was an unacceptable national concession, perhaps to facilitate a resolution of the FYROM naming issue, but the project was bedeviled by more practical considerations and disputes, including objections of the Archaeological Service regarding locations rich in antiquities, of the City of Athens, and of the sculptor himself.

The state donated it to the City of Athens shortly before Dora Bakoyannis was elected Mayor in October, 2002.  Just before, outgoing Mayor Nikitas Kaklamanis and the City Council approved the blueprint for placing the statue in Kotzia Square, directly opposite City Hall. Other locations that had been considered were Omonoia Square, Rizareios Park, and the beginning of Syggrou Avenue.

Nikos Vatopoulos, a cultural affairs reporter and a prominent expert on the history of the city of Athens has described the sculpture thusly:

“It is a peaceful statue and not a militaristic one. It is characterised by spirituality and grace and it befits what should be a concern of the city of Athens, the showcasing of the work of older and newer artists. The location that was chosen is a prominent one and may prove successful. That will be judged by the functioning of the city. What is important is to protect and bolster the physiognomy of Athens.”

TANEA Team 17 Απριλίου 2019 | 17:18
Share
Δείτε επίσης
Περισσότερα άρθρα για Αγγλική έκδοση
Editorial: A calculated diplomacy
It is the duty of the government to immediately coordinate with the expert committee Editorial: Clarity
Greece's demographic problem is complex and requires political solutions Editorial: Anachronism
A businessman has the right to bar entry to his or her establishment of unvaccinated people Editorial: Reaching an understanding
Editorial: Privileges
The NATO Summit is bound to be newsworthy as it is Biden’s first Editorial: Lines
The government must ensure that the path toward modernisation will begin. Editorial: Changes
Covid free Kythnos island – 100% of the population vaccinated
Tourism minister in the Netherlands
There are strikes, like the one at the port, held just for the sake of declaring them Editorial: Conceptions
Ideally, we should fashion a new social and economic model for Greece Editorial: Model
The government must urgently undertake necessary initiatives to root out organised crime Editorial: Root out organised crime
COVID-19 vaccines and immunity: We are not among the lucky ones
Our era requires balances, seriousness, planning, and of course to defend one’s red lines Editorial: A coordinated foreign policy
The Turkish Foreign Minister confirms that the big goal is to convene a Mitsotakis – Erdogan meeting Exclusive Interview TO VIMA – Mevlut Cavusoglu: The “keys” for a solution