'I directly call upon the Prime Minister and the government to take action to protect the independence of the Bank of Greece, which is guaranteed by both European and Greek law,' said Greece's central banker. 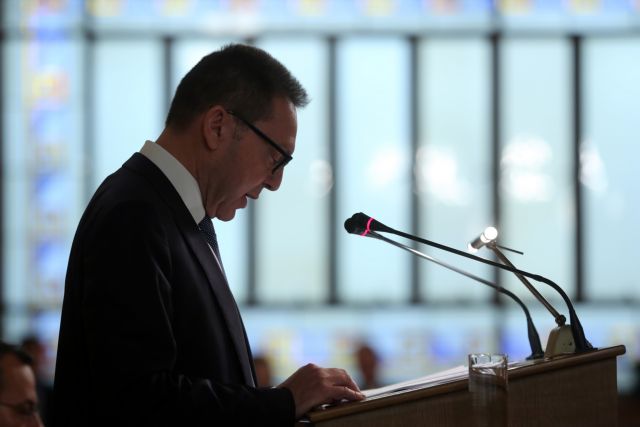 Bank of Greece Governor Yannis Stournaras has lashed out at Alternate Health Minister Pavlos Polakis, who handed over to the government-friendly newspaper Documento a transcript of a conversation he had with the country’s central banker regarding a probe of a 100,000 euro loan he was issued by Attica Bank.

In a statement issued today, Stournaras asks Prime Minister Alexis Tsipras and the government to protect the institutional independence of the Bank of Greece.

The full statement of the Bank of Greece Governor is as follows:

“In the over four years that I have had the honour to have been assigned the position of Bank of Greece Governor, I have for obvious reasons avoided statements that could be exploited politically.”

“This is all the more true when, because of the Bank of Greece’s status as a member of the Eurosystem, I am required to conduct oversight of part of the Greek banking system. However, yesterday’s unprecedented move of a representative of the executive branch of power to attempt to influence in an unheard of manner the way in which I exercise my duties obliges me to make self-evident clarifications and to take action.”

“There is no precedent in any European country for a government minister to mechanically record a telephone conversation that was not conducted in public and to selectively give altered excerpts to a pro-government press outlet, to serve personal interests.”

“These are actions that occurred without my consent, in violation of relevant provisions of the criminal code, and competent judicial authorities have a duty to intervene of their own accord.”

“The unheard of effort of Minister Pavlos Polakis to influence the administration of the Bank of Greece and me personally regarding how we carry out our duties constitutes a flagrant institutional aberration.”

“I directly call upon the Prime Minister and the government to take action to protect the independence of the Bank of Greece, which is guaranteed by both European and Greek law.”

TANEA Team 19 Φεβρουαρίου 2019 | 17:19
Share
Δείτε επίσης
Περισσότερα άρθρα για Αγγλική έκδοση
In times of tensions military service is viewed as a national duty Editorial: Incentives for early military service
An emotional start in taking a position on developments in the region would be catastrophic Editorial: A measured response to Israeli-Palestinian conflict
The alternate interior minister said problems with COVID-19 self-tests will be resolved by the end of May Government poised to abolish mandatory SMD to leave home, working to solve self-test problems
If Syriza believes it can garner political gains with daily political transformations it is sorely mistaken Editorial: Political vertigo
Santander Consumer Finance begins activities in Greece
Evangelos Marinakis: Post-Covid Shipping and the Environment – Green Energy Investments
The US ambassador says Biden has “opened up a new vocabulary of cooperation” with Greece Pyatt see deeper US-Greece strategic ties under Biden administration
The case will be re-tried in the framework now set by the Council of State Bombshell Council of State ruling accepts state’s vaccine side-effect liability
May Day should be honoured with a single march each year Editorial: Unity
Transcending the collective crisis will require leadership and not troublemakers Editorial: Messages
After a six-month shutdown, workers in the restaurant business laid the tables Editorial: The first step
The government has repeatedly said that the existing framework is outdated Battle royal looms over government bill overhauling labour relations, limiting strike action
The labour trade union movement is an invaluable and irreplaceable weapon of workers An urgent need for the rebirth of the trade union movement
Editorial: The pendulum of American politics
The thirty-somethings rushed to be vaccinated for the sake of their families and their friends Editorial: Front-and-centre