'What Mr. Dragasakis said in the context of parliamentary debate was skewed in order to stir a sensation,” said Tzanakopoulos. 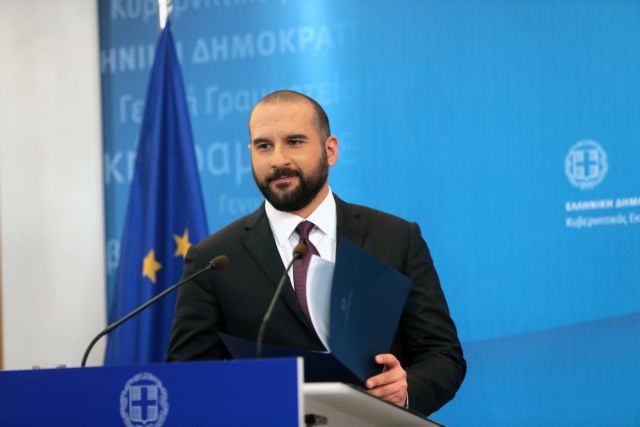 Government spokesman Dimitris Tzanakopoulos has again denied that there is any prospect of a recapitalisation of Greece’s four systemic banks just days after Deputy Premier Yannis Dragasakis warned of the dangers of such an eventuality for taxpayers, who could be called upon to underwrite it.

Tzanakopoulos claimed that Dragasakis’ remarks to parliament were skewed by the media.

“Scenarios of a recapitalisation of banks exist only in the imagination of journalists who engage in danger-mongering for their own reasons. What Mr. Dragasakis said in the context of parliamentary debate was skewed in order to stir a sensation,” Tzanakopoulos told News 24/7 radio, asserting that the deputy premier was speaking theoretically.

On 6 February, Dragasakis for the second time in a few days noted the difficulties involved in efforts to resolve non-performing loans. He attributed delays to the time needed to arrive at a formula to maintain the protection of debtors’ primary homes from foreclosure, which until now was covered by the related “Katseli Law”, named after the former economy minister (under George Papandreou) who introduced the legislation establishing such protection.

Dragasakis, who is also serving as Economy and Development Minister, had said that if a proper solution is not found, then banks will need new capital, which the Greek taxpayer will have to pay for.

“If we are not careful, we can make an arrangement that will lead banks to the point where new capital will be required,” he said.

Dragasakis said that by the beginning of March at latest the new framework for the resolution of NPLs will be ready.
That statement came five days after Dragasakis’ 31 January remarks to the Parliamentary Committee on Production and Commerce, which he hastened to deny the next day.

TANEA Team 11 Φεβρουαρίου 2019 | 18:21
Share
Δείτε επίσης
Περισσότερα άρθρα για Αγγλική έκδοση
European supervised drug consumption sites have been an inextricable part of drug treatment Editorial: The first step
The overturning of Roe v. Wade turns the clock back 50 years for American women. Editorial: Back and forth
Thymios' statement - “I no longer trust people.” – is a punch in the gut. Editorial: A punch in the gut
Editorial: Audits of politicians' wealth
Mario Draghi has a prominent position in the EU architecture Editorial: Alliance
After a certain point, the necessary caution is a matter of personal responsibility Editorial: COVID-19 and personal responsibility
Extremists still constitute a threat Editorial: Threat
A consciously responsible stance is needed Editorial: Maintaining COVID-19 alertness
The late PM Constantine Karamanlis famously said, 'We belong to the West' Editorial: Contradictions
The end of EU enhanced fiscal supervision signals the exit from the tunnel Editorial: Breakthroughs
Head of Greek Pomaks’ Association rips into Erdogan’s revisionist expansionism
All Greek governments since Andreas Papandreou's demanded the return of the Marbles Osborne: ‘Deal to be done’ on sharing Parthenon Marbles
All efforts toward a radical resolution of the refugee problem have failed Editorial: The end does not justify the means
France's centrist forces are rallying behind President Emmanuel Macron Editorial: The political centre
The Germans are returning, this time not to impose their will but to cooperate Editorial: Greece as a bridge between Western Balkans, EU