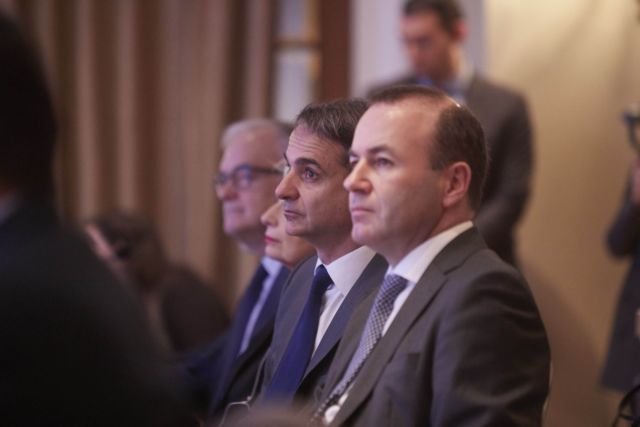 The government, which once battled strict fiscal discipline, is now boasting because its performance in producing primary surpluses exceeds the targets of the bailout memorandum.

Suddenly, exceeding primary surplus targets became a gauge of the effectiveness of the country’s economic policy.
What the government – which defines itself as left-wing - actually is boasting about is the fact that it managed to tighten the straps of a straightjacket.

The government, except for the finance minister to some extent, does not acknowledge the harsh reality, but Manfred Weber did. That is why the German head of the European People’s Party – and by all indications the successor to Jean-Claude Juncker as President of the European Commission – left open the possibility of a renegotiation of the Greek programme’s primary surplus targets.

Weber in essence acknowledged that the straighgtjacket must be loosened and not further tightened so that any government could present ostensibly popular policies.

He said that the precondition for that letting up is the opening of new areas of growth. For that to happen, economic activity must be freed from the shackles of over-taxation. Growth under the current conditions cannot occur.

On the contrary, the country needs measures such as freeing up the bank accounts of those debtors who responsibly pay off their debts.

More such relief measures will certainly be needed.

The Greek economy must at long last be freed from its straightjacket.

Λιβύη : Ο φανατικός ισλαμιστής που εκτελεί το σχέδιο του Ερντογάν
TANEA Team 8 Φεβρουαρίου 2019 | 17:27
Δείτε επίσης
Περισσότερα άρθρα για Αγγλική έκδοση
Turkey’s provocations are non-stop Editorial: Audacity
Hospitals should not be excluded from public-private partnerships Editorial: Partnerships
The government in Tripoli has said that Greece 'has nothing substantial to offer'. Haftar in Athens, Greece to veto EU approval of Libya peace deal if MOU with Turkey not canceled
The nominee has the prestige and wherewithal to serve the office in a worthy manner Editorial: Consensus
The last president who was not a politician was Christos Sartzetakis who served between 1985-1990 In historic move, Mitsotakis taps Council of State chief to serve as first woman president
Realism at all levels and in every way must be the only guide Editorial: Realism
Greece cannot be punished ad infinitum for the errors of the past Lower primary surplus targets key to Greek economic growth
Indian slaves swap life of bondage for seat in boardroom at tea plantation
Editorial NEA: Puzzle
EU resumes probe into Boeing-Embraer deal, sets new April 30 deadline
Trump praises Greek economic progress at talks with Greek PM, avoids mention of Turkey, Libya
Editorial: Threats
From the signing of an agreement to its implementation the distance is never small Editorial: Message of Peace
The country that is ever more isolated is not Greece but Turkey Editorial: Advantages
The political system is facing Turkish provocations united Editorial: Unity