New Democracy leader Kyriakos Mitsotakis said it is inconceivable for the agreement to be ratified without parliament having been given the complete text of FYROM’s Constitution with the amendments stipulated in the accord. 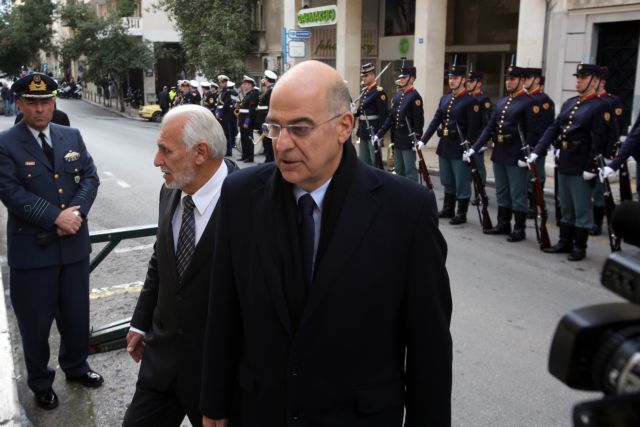 New Democracy and the centre-left Movement for Change are up in arms over the fact that the plenary session of parliament does not have the revised and codified text of the Constitution of the Former Yugoslav Republic of Macedonia just one day before the Greece-FYROM Prespa agreement is scheduled to be ratified by the Greek Parliament.

New Democracy leader Kyriakos Mitsotakis said it is inconceivable for the agreement to be ratified without parliament having been given the complete text of FYROM’s Constitution with the amendments stipulated in the accord.

Skopje has sent Athens a diplomatic note verbale that specifies the amendments to its Constitution that have been definitively approved, and says that the amendments will be incorporated in the country’s basic law once the Greek Parliament approves the protocol for FYROM’s admission to Nato.

Alternate Foreign Minister Yorgos Katrougalos, who is essentially acting foreign minister since PM Alexis Tsipras assumed the foreign affairs portfolio, defended the provisions of the accord and the procedure being followed.

Top New Democracy MP and former minister Nikos Dendias lambasted the government over the perceived procedural problems in the agreement and the chain of events.

“The alternate foreign minister’s admission that there is not and there will not be a codified version of the Constitution of Skopje (sic), including the amendments based on the agreement, confirmed our worst fears,” Dendias said in the first of a series of tweets.

“The constitution of our neighbouring country remains as it was and at the same time they have voted to amend it without incorporating (the amendments) in a unified text, so that Skopje can invoke whatever it wants, whenever it wants as it sees fit,” read the second tweet.

“This behaviour constitutes a violation of the signed agreement and the stance of the government constitutes a defrauding of the Greek Parliament,” he concluded.

Movement for Change MP Andreas Loverdos demanded a list of related documents and asserted that Skopje changed the sequence of events provided in the agreement and will now incorporate the amendments in its constitution only after the Greek parliament formally approves FYROM’s Nato accession.

“All of these assertions of New Democracy are simply an excuse because it cannot find essential points in the agreement that depart from the national line (composite name to be used by all),” Katrougalos said.