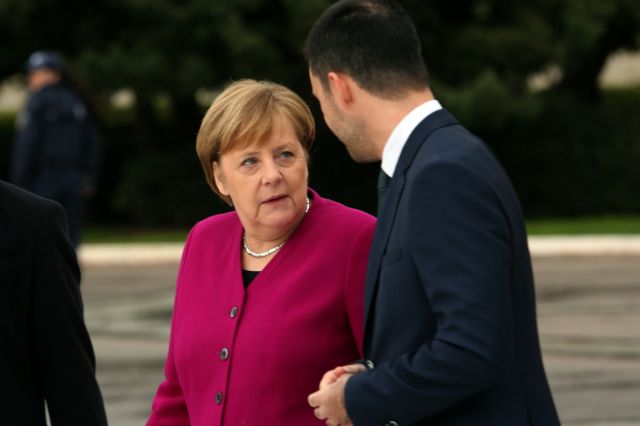 Underlining Berlin’s interest in Greece’s economic recovery, German Chancellor while in Athens on 11 January held a no-holds-barred dialogue with prominent Greek entrepreneurs and corporate executives at a luncheon organised by the German Ambassador to Athens, Jens Ploetner.

Participants who spoke on background described the Chancellor as friendly, direct, and simple in her manner and said she exhibited a deep knowledge of Greek affairs.

The discussion touched on a variety of areas on which Merkel expressed her views:

Taxation: Merkel conceded that tax cuts are in order but opposed these and any benefits being decided at the expense of the very high (3.5 percent of GDP) primary surplus target to which Greece has agreed with creditors and partners, as that would undermine trust in the country, which remains “sensitive” or fragile, as she noted.

Public Administration: Merkel said that there has not been sufficient progress, despite the fact that more generally there has been progress on the reform front.

Investment: Merkel stressed that Greece needs substantial investments in terms of both their number and size.

European Union Defence: The German Chancellor expressed support for the EU’s Common Security and Defence Policy (CSDP). She stressed that Europe must not slide into populist policies and that it must deal successfully with the US-China trade war.

Greek Banks: Merkel said that Greek banks still have “issues”. She said one sees that there are efforts being made and she specifically cited Eurobank’s effort to bolster its private character and clean up its books (as regards non-performing loans).

TANEA Team 12 Ιανουαρίου 2019 | 01:17
Share
Δείτε επίσης
Περισσότερα άρθρα για Αγγλική έκδοση
Greece’s role as an energy hub must be emphasised Editorial: Opportunities
Mitsotakis-Biden talks: Greek-Turkish relations, the war in Ukraine, wayward Turkey’s new role in NATO
It is not in Greece’s interest for Turkey to be isolated or humiliated Editorial: Opportunity
The Marshall Plan prioritised rebuilding export capacity How should a Marshall Plan for Ukraine work?
Drop in COVID-19 deaths - number of infections, intubated patients stable, hospital admissions rise
Policing of universities is an unpleasant but necessary measure Editorial: No excuse
A strict price inspections policy is needed to curb untrammelled price hikes Editorial: Dealing with inflation
Editorial: Axes
Ta Nea has repeatedly called for decisive action Editorial: University police force plan on the back burner
Everything depends on how the social media are used Editorial: Words
SYRIZA’s gains in 2012 were a Pyrrhic victory. Editorial: Populism
There will be a 600 euro cap on the rebate Amidst uproar over skyrocketing energy costs, Mitsotakis announces rebates for households
This is the 12th anniversary of the deadly arson attack Editorial: Radio silence
Many cases involving extremely serious crimes have not been tried Editorial: A bitter political legacy
EODY has recorded a total of 3.34mn COVID-19 infections EODY: 32 COVID-related deaths, over 8,000 infections, 660 reinfections, 231 intubated patients