FYROM’s Parliament approved the name change by a margin of one vote more than the requisite two-thirds majority, 81 votes in the 120-member legislature. 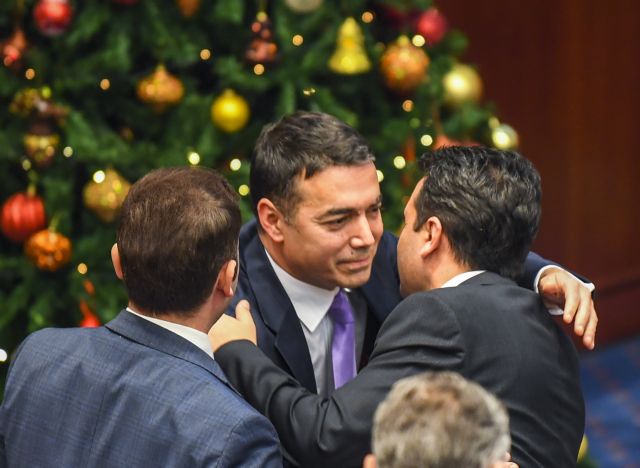 After a quarter century of wrangling between Athens and Skopje , the Parliament of the Former Yugoslav Republic of Macedonia completed approval of the Greece-FYROM Prespa Agreement by passing the constitutional amendments stipulated in the accord, including changing the country’s name to Republic of North Macedonia.

The agreement comes into effect upon ratification by the Greek Parliament, which is expected within the month.

The approval of Skopje’s admission to Nato will occur in Greece and other Alliance member-states right after the ratification in Athens.

FYROM’s Parliament approved the name change by a margin of one vote more than the requisite two-thirds majority, 81 votes in the 120-member legislature, Reuters reported.

The four agreed to amendments were approved in a fast-track procedure.

Beyond the name change, there were also changes to the Preamble of the Constitution, to the reference to the state’s duty to care for the country’s diaspora, as well as a declaration that Skopje respects the territorial integrity of neighbouring countries.

Prime Minister Alexis Tsipras says that he has secured the absolute parliamentary majority (151 seats out of 300) to ratify the accord in the Hellenic Parliament, despite the fact that his junior coalition partner, the Independent Greeks, will vote down thee ratification.

That means that Tsipras, beyond his 145 MPs, has secured the approval of six MPs from smaller parties