Mitsotakis explains to Merkel why he opposes Prespa Accord

The talks also touched on tax cuts that ND has proposed, attracting investment, and continuing on the path of structural reforms. 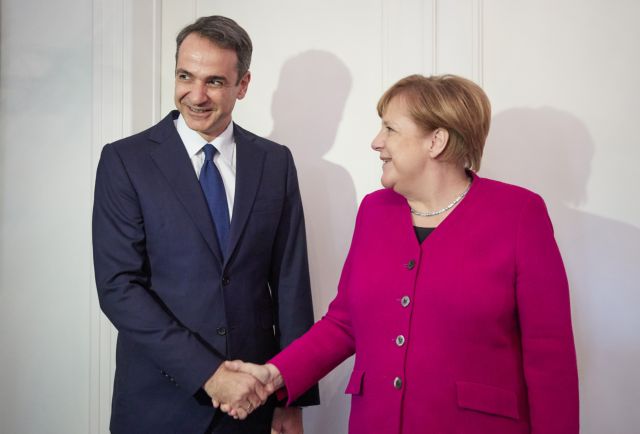 New Democracy leader Kyriakos Mitsotakis explained why his party will vote down the Greece-FYROM Prespa Agreement when it is tabled in the Greek Parliament for ratification to visiting German Chancellor Angela Merkel, who fervently supports the agreement and expressed gratitude to PM Alexis Tsipras and FYROM PM Zoran Zaev for concluding it.

In a written statement after the meeting, Mitsotakis stated that he is against the agreement “not only because that is the will of the vast majority of the Greek people, but also because it is a bad agreement that instead of solving old problems in the wider Balkan region may spark new ones.That is our position and it is non-negotiable.”

Mitsotakis stressed his political-ideological kinship with Merkel, beyond the deep disagreememt on the FYROM naming issue.

“We spoke earnestly with Chancellor Merkel today, as the forces of the (conservative) European People’s Party (EPP) – which has diachronically supported Europe and does not view it opportunistically - know how to do.”

Mitsotakis said that aside from Skopje the focus of his discussion with Merkel was the Greek economy. He said that “some in Brussels insist on prettifying (Greece’s economic problems) for the sake of fleeting impressions”.

Mitsotakis stirred a political maelstrom recently when he said that many Greeks believe that Greece’s European partners allowed PM Alexis Tsipras to scrap legislated pension cuts in return for concluding such an agreement.

Asked at a joint news conference with Tsipras yesterday whether the quid pro quo claim was true, Merkel in a peremptory manner dismissed it saying that she did not know why she would have address such a question, clearly implying that it was nonsense.

The talks also touched on tax cuts that ND has proposed, attracting investment, and continuing on the path of structural reforms.

As regards the issue of refugees and migrants, Mitsotakis stressed the need for strict border policing and reforming the asylum procedure so as to transfer people from the Aegean islands to other locations.

TANEA Team 11 Ιανουαρίου 2019 | 23:48
Share
Δείτε επίσης
Περισσότερα άρθρα για Αγγλική έκδοση
Greece’s role as an energy hub must be emphasised Editorial: Opportunities
Mitsotakis-Biden talks: Greek-Turkish relations, the war in Ukraine, wayward Turkey’s new role in NATO
It is not in Greece’s interest for Turkey to be isolated or humiliated Editorial: Opportunity
The Marshall Plan prioritised rebuilding export capacity How should a Marshall Plan for Ukraine work?
Drop in COVID-19 deaths - number of infections, intubated patients stable, hospital admissions rise
Policing of universities is an unpleasant but necessary measure Editorial: No excuse
A strict price inspections policy is needed to curb untrammelled price hikes Editorial: Dealing with inflation
Editorial: Axes
Ta Nea has repeatedly called for decisive action Editorial: University police force plan on the back burner
Everything depends on how the social media are used Editorial: Words
SYRIZA’s gains in 2012 were a Pyrrhic victory. Editorial: Populism
There will be a 600 euro cap on the rebate Amidst uproar over skyrocketing energy costs, Mitsotakis announces rebates for households
This is the 12th anniversary of the deadly arson attack Editorial: Radio silence
Many cases involving extremely serious crimes have not been tried Editorial: A bitter political legacy
EODY has recorded a total of 3.34mn COVID-19 infections EODY: 32 COVID-related deaths, over 8,000 infections, 660 reinfections, 231 intubated patients