Chrysostomos said that although Ankara says it wants a federation [which countless UN resolutions call for], in fact it wants the worst form of confederation. 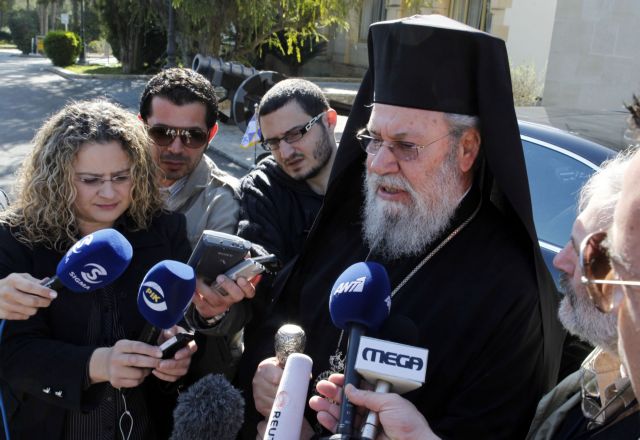 Archbishop Chrysostomos of Cyprus has said that while President Nikos Anastasiades aims to solve the Cyprus problem in his current, second term, Ankara is not yet ready to move toward a solution.

Chrysostomos said that although Ankara says it wants a federation (which countless UN resolutions call for), in fact it wants the worst form of confederation.

He said that the ultimate goal of Turkey is to gain control over the entire island, and that it has laid the groundwork for this by bringing about 300,000 Turkish settlers (settlers and their descendants) into the Turkish-occupied north in a bid to alter the demographics of the island.

“When the Turks become a majority, they will demand a referendum and say that the will of the people should be heeded,” the archbishop said.

Chrysostomos underlined that historically Turkey has grabbed territories that were not its own and holds them to this day, including Alexandretta and Antioch.

ΚΙΝΑΛ: Το παρασκήνιο της παρέμβασης Παπανδρέου – Η ανατροπή του σχεδίου της Γεννηματά
TANEA Team 31 Δεκεμβρίου 2018 | 14:13
Share
Δείτε επίσης
Περισσότερα άρθρα για Αγγλική έκδοση
Blinded by power the Syriza-Independent Greeks thought they could rule without constitutional checks Editorial: Paying the piper
German pig farmers suffer after abattoir’s closure
China braces for more rainstorms over weekend, climate change blamed
SYRIZA is battling to be the first party never to remove its head from the sand Editorial: Self-criticism
Democratic rule is not a given but it has strong antibodies and decades of experience Editorial: Judiciary
Dermitzakis sees task of National Council on Research, Technology and Innovation as key to economic recovery
Everything must come to light now! Editorial: Let everything come to light
Given the fact that Greece did very well in the first phase of the pandemic we can do it again now. Editorial: Restart
One can buttress a new type of citizen-friendly state and a public administration that will rely on expedite digital reform Editorial: State
Shadows, rumours about apartment owned by Greek Orthodox Archdiocese of Australia