Özersay criticised Lute for not referring to a “common vision” and for pushing an agreement on the basis and the agenda for talks by the end of the year. 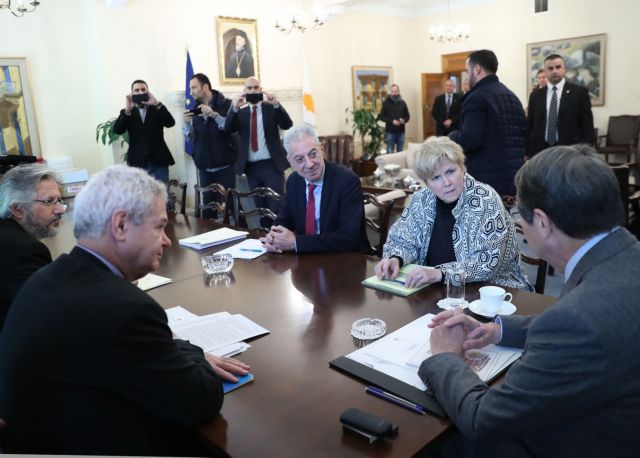 Kudret Özersay, the “deputy prime minister and foreign affairs minister” of the regime in Turkish-occupied northern Cyprus, has come out against rushing a new round of settlement talks, for which UN special envoy for Cyprus, Jane Holl Lute has been meticulously preparing, as there is no “common vision” with the Greek Cypriots regarding what a settlement would look like and what the agenda for talks should be.

“I had said that the UN will not pull a rabbit out of a hat, and that is where we are now,” he said.

UN special envoy Jane Holl Lute has asked the two sides to agree by the end of the year on terms of reference on the basis of which the talks – which have been held on and off for over 40 years – might be jump-started.

“She set a timeframe by the end of December for the terms of reference to be agreed to so that she can submit a report to the UN Secretary General, who will decide whether the conditions exist for the resumption of the talks,” Anastasiades said of Lute’s plans.

Özersay, however, declared that the UN deadline cannot be met due to the lack of convergence on key issues. “We must not put the cart before the horse,” he declared.

Özersay questioned the entire procedure adopted by the UN special envoy. He claimed that each side will interpret the terms of reference as it sees fit, as the differing view of the two sides on what should be negotiated have not been taken into account.

Özersay and the myth of Sisyphus

Noting that there have been major shifts in global politics with leaders pushing their personal agendas, Özersay described the Cyprus problem with the terms of Greek mythology.

For the last 50 years, he said, the Cyprus problem has been like the rock of Sisyphus, which was pushed to the top of the mountain and then rolled down.

He cited the fact that Britain - which retains its sovereign bases on the island and has to this day played a pivotal role in Cyprus - is preoccupied with the Brexit crisis and that it is unclear what role it will play.

On the broader EU level, he said that the May European Parliament elections – which are exceptionally important for countries like France, Germany, and Greece – will result in member-states tending more to their domestic affairs, just as Turkey in 2019 will be focused on crucial local elections and rapid-fire developments in Syria (where the US has decided to withdraw its forces).

All that, he said, raises serious questions about whether an international conference to solve the Cyprus problem will be feasible in 2019.

Özersay criticised Lute for not referring to a “common vision” and for pushing an agreement on the basis and the agenda for talks by the end of the year.

“For me, there is no such possibility. Still, next year, after the events that I mentioned pass (European Parliament elections and Turkey’s local elections), even if there is a different setting we must not directly discuss the terms of reference, but rather whether we do or do not share a common vision,” he said.

TANEA Team 27 Δεκεμβρίου 2018 | 16:18
Share
Δείτε επίσης
Περισσότερα άρθρα για Αγγλική έκδοση
In times of tensions military service is viewed as a national duty Editorial: Incentives for early military service
An emotional start in taking a position on developments in the region would be catastrophic Editorial: A measured response to Israeli-Palestinian conflict
The alternate interior minister said problems with COVID-19 self-tests will be resolved by the end of May Government poised to abolish mandatory SMD to leave home, working to solve self-test problems
If Syriza believes it can garner political gains with daily political transformations it is sorely mistaken Editorial: Political vertigo
Santander Consumer Finance begins activities in Greece
Evangelos Marinakis: Post-Covid Shipping and the Environment – Green Energy Investments
The US ambassador says Biden has “opened up a new vocabulary of cooperation” with Greece Pyatt see deeper US-Greece strategic ties under Biden administration
The case will be re-tried in the framework now set by the Council of State Bombshell Council of State ruling accepts state’s vaccine side-effect liability
May Day should be honoured with a single march each year Editorial: Unity
Transcending the collective crisis will require leadership and not troublemakers Editorial: Messages
After a six-month shutdown, workers in the restaurant business laid the tables Editorial: The first step
The government has repeatedly said that the existing framework is outdated Battle royal looms over government bill overhauling labour relations, limiting strike action
The labour trade union movement is an invaluable and irreplaceable weapon of workers An urgent need for the rebirth of the trade union movement
Editorial: The pendulum of American politics
The thirty-somethings rushed to be vaccinated for the sake of their families and their friends Editorial: Front-and-centre