Ζωή & Τέχνες Επιστήμη & Τεχνολογία Υγεία Γυναίκα Παιδί Πρόσωπα & Ιστορίες Συνεντεύξεις Auto Νέα Σκίτσα Info graphics Media Market
tanea.gr > Αγγλική έκδοση > Kammenos says he will resign when Skopje approves Prespa Accord, then does another aboout-face
' I cannot accept staying on as defence minister and at the same time sign on to giving away the term ‘Macedonia,” said the defence minister

Kammenos says he will resign when Skopje approves Prespa Accord, then does another aboout-face

In Larissa, Kammenos said that he will pull out of the government if the FYROM Parliament finalises the constitutional amendments required by the Prespa accord 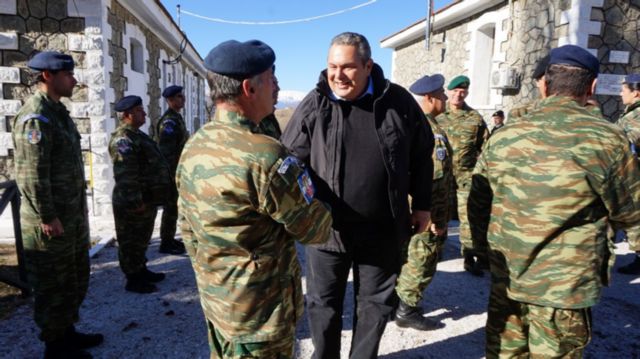 The latest episode in the never-ending saga with Defence Minister and Independent Greeks leader Panos Kammenos’ on-again off-again threats to withdraw from the government if and when the Greece-FYROM naming agreement is tabled in the Greek Parliament came today when he addressed military brass in Larisa.

Asked if he believes elections will be held in the spring or autumn, he made clear that he would prefer that they take place later rather than sooner.

“I believe elections must not be held soon. The Skopje issue came to the forefront, despite the agreement we had reached with SYRIZA in order to govern together, much earlier than planned. The best thing for the country is for elections to be held at the end of the four-year term (by October),” Kammenos said.

“For our part, we will do whatever is necessary to that end.  As you can understand, however, there are certain issues that touch upon our red lines. As the political head of the armed forces, and due to the public position I have maintained from the start of my political career,Kamme

With all polls showing that his party has little chance of meeting the  three percent threshold to enter parliament, Kammenos has placed his bets on luring a sufficient number of the overwhelming majority of voters who are dead set on scuttling the deal and who will not accept Greece approving any name that includes the word Macedonia.

In Larissa, Kammenos said that he will pull out of the government if the Parliament of the Former Yugoslav Republic of Macedonia finalises the constitutional amendments required by the Prespa accord on 15 January, 2019, as planned.

That was yet another shift from his longstanding assertions that he will resign only after it is tabled in the Greek Parliament, which would allow PM Alexis Tsipras to put off the ratification for as long as he believes Kammenos is useful in the government.

Hours later, presumably under pressure from the PM and the government, Kammenos returned to the prior position – that he will resign when the accord reaches the Greek Parliament.

“I am glad about these provocations because they expose the character of FYROM’s leadership. His (Zaev’s) constant and provocative irredentist statements confirm the view of those of us who said that they (Skopje) cannot conceal themselves under the cloak of an agreement that they do not intend to comply with,” Kammenos said.

Tsipras’ threat to scrap accord welcomed

“I am also glad that the PM in parliament said that if these provocations continue, and if for example the non-existence of a Macedonian ethnicity is disputed, or if their irredentist conceptions regarding the existence of a putative Macedonian minority in Greece continue to be expressed, there will be no agreement,” Kammenos said.

Kammenos in parliament called on New Democracy leader Kyriakos Mitsotakis to clarify whether if the agreement is ratified by this government he will pull out an annul the accord if and when he comes to power.

“It is a given that if – God forbid – the agreement is tabled in the Greek Parliament, I shall not continue to serve as defence minister and the Independent Greeks will cease to be a part of the ruling coalition.”

What he has not made perfectly clear is if he will withdraw his parliamentary support for the government once he and his MPs leave the cabinet.  In the past he has suggested he might do so, but in the stormy cabinet meeting that led to the resignation of ex-foreign minister Nikos Kotzias, Kammenos vowed that he will not topple the government by denying it a parliamentary majority.

Ζέτα Δούκα: Δείτε τι έκανε μαζί με την κόρη της
TANEA Team 13 Δεκεμβρίου 2018 | 18:07
Δείτε επίσης
Περισσότερα άρθρα για Αγγλική έκδοση
In the economy words can help shape the climate but deeds yield results Editorial: Profile
Democracy has a duty to defend itself Editorial: Adventure
Editorial: Pillar
Editorial: Crisis
Government and opposition are skirmishing over the rubble in Mati Editorial: Duty
As it turned out Mega was too big to die Editorial: The return of Mega Channel
The government cannot address the problem of school violence on its own Editorial: Wave of violence
Job creation is the overarching aim so that society can prosper Editorial: Automatic pilot
Right now there must be delicate diplomatic manoeuvres abroad and a solid front domestically Editorial: Consensus
Editorial: Delusions
Editorial: Readiness
It seems that freedom of speech cannot be taken for granted in our country Editorial: Fascism
At last it seems that reason is prevailing over belief and superstition about vaccines Editorial: Sirens
Dialogue must continue to be a basic pillar of Greek foreign policy Editorial: Dialogue
SYRIZA links Oruc Reis incident to Turkey's disputation of Greek sovereignty over Aegean islets