The government attempted to persuade public opinion that the auctions involve only debtors who are able to pay but do not, and that the properties being auctioned off are all villas and mansions. 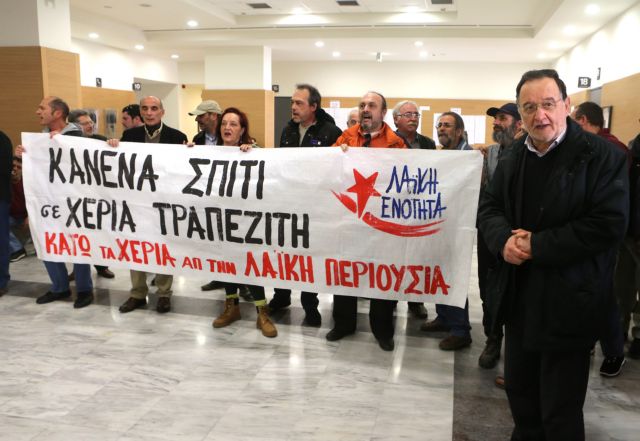 The political leap from SYRIZA’s pre-electoral slogan “No home in the hands of a banker” to 11,443 auctions of foreclosed homes is huge. The enormity is not just arithmetical, even though the auctions have reached a five-digit number, but also social and political.

One can easily understand what this leap means for society. The government attempted to persuade public opinion that the auctions involve only debtors who are able to pay but do not, and that the properties being auctioned off are all villas and mansions.

In reality, the foreclosed property auctions in Greece involve the same category of debtors as in other countries, people who either were always in lower income brackets, or who fell into those brackets due to the protracted financial crisis. It is not that they did not want to pay, but they could not pay off their debts due to their professional struggle for survival.

Politically, the great leap highlighted the huge gap in the ruling party’s political rhetoric and practice, which has been explained away by the PM as self-deception regarding economic and political realities, but in fact constituted political fraud.

The property auctions are the result of the political fooling of the electorate, to which SYRIZA resorted in order to rise to power.

Even worse, after that political mockery there was not a single apology to the people who lost their homes, and whom the government described as wealthy parasites of society to boot.

Τι λάθος κάνουν οι Τούρκοι με την Ελλάδα
TANEA Team 25 Οκτωβρίου 2018 | 13:48
Δείτε επίσης
Περισσότερα άρθρα για Αγγλική έκδοση
The president-elect of Greece has won people over even before assuming office Editorial: Modesty
Marinakis just dealt the final blow to the so-called ‘clean-up’ of Greek Football in front of UEFA/FIFA
The dialogue Marinakis to Grammenos: «You have been doing anything that Savvidis was telling you for such a long time and now you’ve become sensitive?»
President-elect Ekaterini Sakellaropoulou symbolises Greece’s passage to a new era with greater consensus and less toxicity Editorial: A victory for democracy
'Our country is governed by the rule of law and is a force of stability, growth, and culture' President-elect Sakellaropoulou to focus on defending rights, sovereignty
Turkey’s provocations are non-stop Editorial: Audacity
Hospitals should not be excluded from public-private partnerships Editorial: Partnerships
The government in Tripoli has said that Greece 'has nothing substantial to offer'. Haftar in Athens, Greece to veto EU approval of Libya peace deal if MOU with Turkey not canceled
The nominee has the prestige and wherewithal to serve the office in a worthy manner Editorial: Consensus
The last president who was not a politician was Christos Sartzetakis who served between 1985-1990 In historic move, Mitsotakis taps Council of State chief to serve as first woman president
Realism at all levels and in every way must be the only guide Editorial: Realism
Greece cannot be punished ad infinitum for the errors of the past Lower primary surplus targets key to Greek economic growth
Indian slaves swap life of bondage for seat in boardroom at tea plantation
Editorial NEA: Puzzle
EU resumes probe into Boeing-Embraer deal, sets new April 30 deadline