The height of the wave between the Peloponnese and Crete, based on the wave model of the National Observatory/meteo.gr, is expected to be over 11 metres. 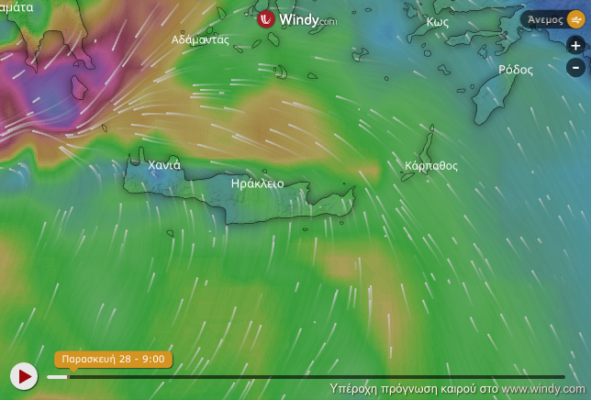 The Mediterranean Cyclone “Xenophon”, as the meteorological service (Meteo) of the National Observatory of Athens has named it, is expected to reach the southern coast of the Peloponnese between 15:00 - 18:00, according to the latest projections.

The height of the wave between the Peloponnese and Crete, based on the wave model of the National Observatory/meteo.gr, is expected to be over 11 metres.

The azure and blue colours of the cyclone plotting map indicate the heights of the rain every three hours. It projects the location of the cyclone at 13:00 and 21:00 today, as well as at 09:00 and 13:00 on Saturday, 29 September.

Based on that data, the cyclone is expected to reach the southern coast of the Peloponnese between 15:00 and 18:00 on Saturday.

Researchers say that based on the wave model of the National Observatory of Athens, location of the over 11-metre wave will be between the Peloponnese and Crete.

TANEA Team 28 Σεπτεμβρίου 2018 | 15:38
Share
Δείτε επίσης
Περισσότερα άρθρα για Αγγλική έκδοση
Unhindered and without external influence, the judiciary must do its duty Editorial: The vindication of #MeToo
AHEPA honors Greek PM Mitsotakis, Cyprus President Anastasiades and shipowner Marinakis
SΕΤΚΕ: 50% discount for accommodation of members of the Hellenic Nurses Association
Greek society does not want any more division Editorial: The bane of toxic politics
Olympic Games: Lefteris Petrounias is pursuing the first Olympic “repeat” in the still rings after 1972
Fire in Stamata, Rodopoli, and Dionysos: “We heard four gas canisters explode”
Educators will be hired to serve in permanent positions in order 'to establish new, upgraded schools' Editorial: Upgrading
Editorial: Feat
For long overdue town planning reform to succeed, we must all actively cooperate Editorial: We must not forget the Mati disaster
Editorial: The 'most complex' Games
Editorial: Proud
The first Mercure in Greece, opens its doors in Rhodes
Greek-Italian “tourism conflict”
In Turkish-occupied Cyprus, Erdogan unleashed an attack against Prime Minister Kyriakos Mitsotakis Editorial: Erdogan's provocations
'Kosova wants to build on the historic ties between our peoples ' Kosovo PM Albin Kurti: 'We would welcome a decision by Greece to recognise Kosovo’s independence'