'Panagiotis Lafazanis, a former SYRIZA minister and currently a party leader, has been summoned by State Security, as was done to intimidate leftists and democrats, during the dark days of post-Civil War Greece,' the composer said. 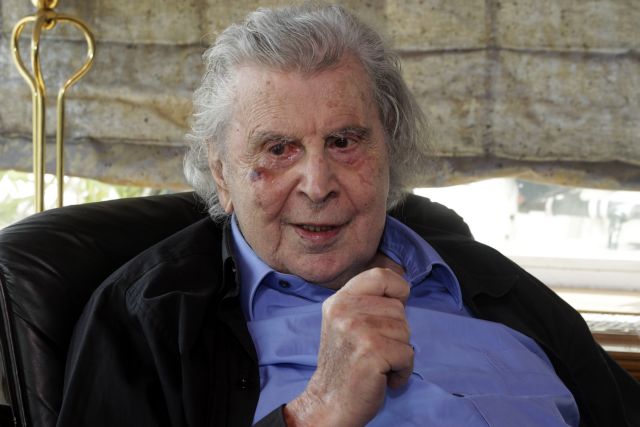 Famed composer Mikis Theodorakis lashed out at Prime Minister Alexis Tsipras, after a probe  was launched against the left-wing Popular Unity Party leader Panagiotis Lafazanis, due to his persistent activist push to block the auctions of foreclosed homes.

In the past, even after Tsipras rose to power, he had very good relations with Theodorakis (see photo). They have since clashed on various issues, including the FYROM naming accord.

Lafazanis reportedly faces possible charges of possession and use of guns and of violating the law concerning flares and fireworks.

He has underlined that he has never owned or used a gun or possessed flares and fireworks.

This morning, he and dozens of supporters staged a protest outside the General Police Directorate of Attica (GADA), where he declared that refuses to be questioned and legitimise the actions of prosecutors and police.

“They will see that I shall soon be the accuser, and not the accused,” he said.

Theodorakis blasted Tsipras and charged that he is employing the tactics of “the communist hunters of post-Civil War Greece”, comparing him to the notorious Public Security Minister of dictator Ioannis Metaxas, Konstantinos Maniadakis.

Maniadakis created a bureau for the prosecution of communists, socialists, and democrats, who were tortured by being forced to sit naked on a column of ice and by the forced drinking of castor oil, until they signed a declaration of remorse.

Mikis Theodorakis’ statement, published on his website, is as follows:

“Panagiotis Lafazanis, a former SYRIZA minister and currently a party leader, has been summoned by State Security, as was done to intimidate leftists and democrats, during the dark days of post-Civil War Greece.

So you have now become another Maniadakis, Mr. Prime Minister?

The speed with which you have backtracked is worthy of admiration.

Shall I also expect my own summons “for an affair concerning me” (the phrase used to summon suspected communists), (and in the long run Makronisos) an island of exile)?
I am jumping the gun…

Hands off Lafazanis (and every Lafazanis)!

That is all I have to tell you.”

In a statement, Greek Police said that the summons for Lafazanis was issued on orders from the Athens Lower Court Prosecutor’s office. It also states that the State Security Division for the Protection of the State and of the Democratic Form of Government, before which Lafazanis was called to appear today, “is competent for the investigation of cases concerning the impeding of the operation of the state”.

TANEA Team 26 Σεπτεμβρίου 2018 | 19:16
Share
Δείτε επίσης
Περισσότερα άρθρα για Αγγλική έκδοση
In times of tensions military service is viewed as a national duty Editorial: Incentives for early military service
An emotional start in taking a position on developments in the region would be catastrophic Editorial: A measured response to Israeli-Palestinian conflict
The alternate interior minister said problems with COVID-19 self-tests will be resolved by the end of May Government poised to abolish mandatory SMD to leave home, working to solve self-test problems
If Syriza believes it can garner political gains with daily political transformations it is sorely mistaken Editorial: Political vertigo
Santander Consumer Finance begins activities in Greece
Evangelos Marinakis: Post-Covid Shipping and the Environment – Green Energy Investments
The US ambassador says Biden has “opened up a new vocabulary of cooperation” with Greece Pyatt see deeper US-Greece strategic ties under Biden administration
The case will be re-tried in the framework now set by the Council of State Bombshell Council of State ruling accepts state’s vaccine side-effect liability
May Day should be honoured with a single march each year Editorial: Unity
Transcending the collective crisis will require leadership and not troublemakers Editorial: Messages
After a six-month shutdown, workers in the restaurant business laid the tables Editorial: The first step
The government has repeatedly said that the existing framework is outdated Battle royal looms over government bill overhauling labour relations, limiting strike action
The labour trade union movement is an invaluable and irreplaceable weapon of workers An urgent need for the rebirth of the trade union movement
Editorial: The pendulum of American politics
The thirty-somethings rushed to be vaccinated for the sake of their families and their friends Editorial: Front-and-centre