Juncker proposed increasing the number of border guards from the current 1,300 to 10,000, in order to shield the EU from a host of security threats. 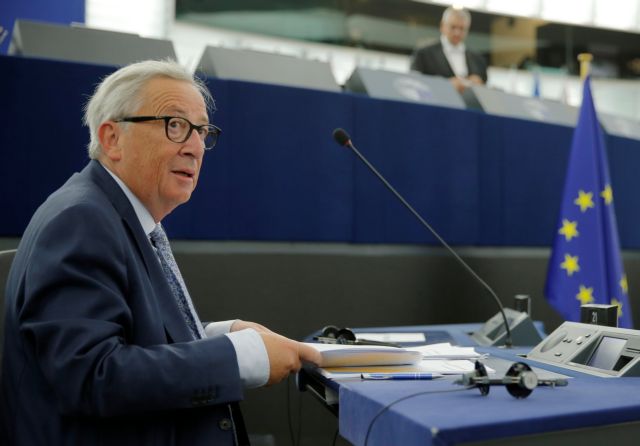 European Commission President Jean-Claude Juncker, in the last state of the union address to the European Parliament before the end of his term, unveiled plans for a huge increase in the number of officers comprising the European Border and Coast Guard Agency, known as Frontex, in order to combat illegal immigration.

Juncker proposed increasing the number of border guards from the current 1,300 to 10,000, in order to shield the EU from a host of security threats.

Juncker said that the proposal does not constitute a militarisation of the EU, but rather a bid to make the Union more autonomous in the handling of its global responsibilities.

“Only a strong and united Europe can protect our citizens against internal and external threats, from terrorism to climate changes,” he told MEPs.

“We propose a bolstering of the European Border and Coast Guard Agency in order to better protect the external borders, with 10,000 border guards by 2020,” Juncker said.

The agency, better known as Frontex, has been substantially strengthened over the last years with measures to manage increased refugee and migrant flows. The force numbered 300 guards in 2014 and now has 1,300 guards, with a reserve of 1,500 national border guards that can be marshaled by the Agency.

The Commission essentially proposed the creation of a real “European external borders police” that will include experts in the repatriation of migrants to their countries of origin.

According to the proposal of the Commission, the Agency should have its own administrative authority and equipment.

The Commission has earmarked 2.2mn euros for the 2012-2027 period, so that the Agency can acquire and maintain air, sea, and land operational capabilities.

The staff of the permanent force will have the authority to conduct border patrols, check IDs, and arrest individuals who cross the borders illegally.

TANEA Team 12 Σεπτεμβρίου 2018 | 16:11
Share
Δείτε επίσης
Περισσότερα άρθρα για Αγγλική έκδοση
Editorial: Barbarity
In times of tensions military service is viewed as a national duty Editorial: Incentives for early military service
An emotional start in taking a position on developments in the region would be catastrophic Editorial: A measured response to Israeli-Palestinian conflict
The alternate interior minister said problems with COVID-19 self-tests will be resolved by the end of May Government poised to abolish mandatory SMD to leave home, working to solve self-test problems
If Syriza believes it can garner political gains with daily political transformations it is sorely mistaken Editorial: Political vertigo
Santander Consumer Finance begins activities in Greece
Evangelos Marinakis: Post-Covid Shipping and the Environment – Green Energy Investments
The US ambassador says Biden has “opened up a new vocabulary of cooperation” with Greece Pyatt see deeper US-Greece strategic ties under Biden administration
The case will be re-tried in the framework now set by the Council of State Bombshell Council of State ruling accepts state’s vaccine side-effect liability
May Day should be honoured with a single march each year Editorial: Unity
Transcending the collective crisis will require leadership and not troublemakers Editorial: Messages
After a six-month shutdown, workers in the restaurant business laid the tables Editorial: The first step
The government has repeatedly said that the existing framework is outdated Battle royal looms over government bill overhauling labour relations, limiting strike action
The labour trade union movement is an invaluable and irreplaceable weapon of workers An urgent need for the rebirth of the trade union movement
Editorial: The pendulum of American politics