Tighter defence cooperation with the US and the role of Souda

It seems that radical Greek governments favour, after an initial “pubescent rebelliousness”, closer ties with the US than conservative ones 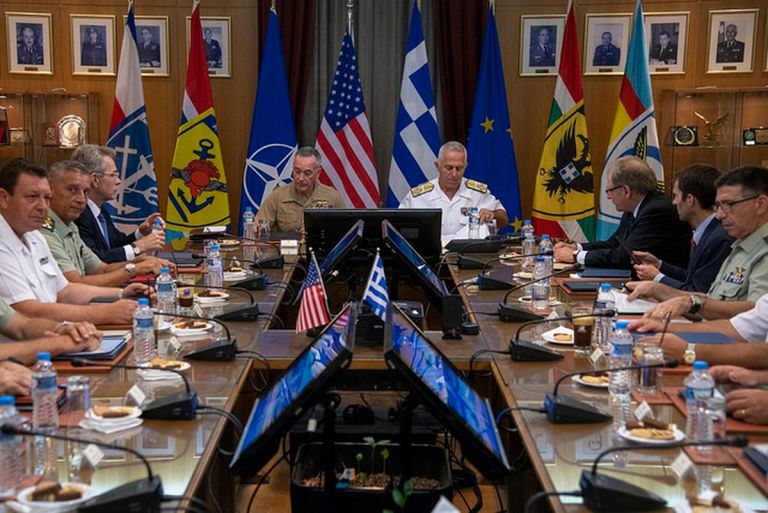 In his book Entangled Allies: U.S. Policy Toward Greece, Turkey, and Cyprus, former US Ambassador to Athens Monteagle Stearns wrote, “The interests of the US in the Eastern Mediterranean are basically military, and our ability to protect them depends on agreements for military facilities that we conclude from time to time with local governments.”

Stearns served as Ambassador to Athens during Pasok’s “difficult” first four years (1981-1985). At the end of the 1950s, he had served as Second Secretary in the Embassy’s political section. His view today has been confirmed completely by events.

It seems that radical Greek governments favour, after an initial “pubescent rebelliousness”, closer ties with the US than conservative ones. One need only recall how the early Pasok passed from the slogan “Out with the bases of death” to negotiations on the new agreement on the bases, the Mutual Defense Cooperation Agreement (MDCA), the cornerstone of the US-Greece defence cooperation.

A few days ago, the US Chairman of the Joint Chiefs of Staff, General Joseph Dunford, visited Athens. That visit may prove to be more important than some initially believed. The Marine Corps General had an in depth discussion with his Greek counterpart, Admiral Evangelos Apostolakis. Despite the efforts of various people to undermine the renewal of Apostolakis’ term in office (which was confirmed recently by the Government Council on Foreign Affairs and Defence), he is a central interlocutor with the American side. The prime minister’s office, beyond its satisfaction with his performance, took this into account in making its decision.

One of the issues on the table in the Apostolakis-Dunford talks was the Greek request for an enhanced American presence in Greece. General Dunford told American journalists at the end of the trip that he was enthused by the prospect.

“If you look at the geography and the parallel running operations in Libya and Syria, and prospective operations in the Eastern Mediterranean, the opportunities here are notable. The Greeks have some interesting perceptions about the Russian naval presence in the Eastern Mediterranean. I believe that we agree that we are witnessing something that we have not seen since the 1980s, as regards the operational behavior of Russia in the region,” Dunford said.

The American emphasis on naval and air force cooperation is focused on the Souda, Crete, air and naval base, and the stationing of MQ-9 Reaper UAVs (drones) in Larisa.

Souda has for decades been a stable value (its cession was renewed recently through formal procedures). The SYRIZA government did what the Samaras-Venizelos government did not do in 2014, because it was afraid of the reaction of the then main opposition SYRIZA party. It accepted the stationing of UAVs.

The cooperation, however, does not stop there. Joint training is almost constant. American fighter jets (such as the F-22 Raptor recently) pass through Greek bases. There is a transfer of materiel to northern Greece, with Alexandroupolis playing a central role due to its proximity to the Black Sea.

Sources say that American officials requested to see first-hand the capability of facilities on the island of Skyros. The Neorio shipyard on the island of Syros recently was transferred to a Greek-American consortium.

Some would like to see a US-Greece defence accord similar that between the US and Israel, but that is not a realistic prospect, despite the pronouncements of Defence Minister Panos Kammenos, about whom there are divergent views in Washington. The minister’s peculiar contacts with Russian interests do not permit absolute trust in him.

Admiral Apostolakis Chairman of the Joint Chiefs of Staff General Dunford Pasok Russia SYRIZA US Drones in Greece US-Greece Defence Cooperation 10 Σεπτεμβρίου 2018 | 00:59
Share
Περισσότερα άρθρα για Αγγλική έκδοση
Today Greece has the opportunity to draft its own economic roadmap for the future Editorial: Challenge
Marinakis: «The result was clearly distorted – Dräger was fouled before the goal»
It is behind closed doors that the harshest stories of violence against women are hidden Editorial: Silence means sharing the guilt
Fourteen ICU beds, donated by Evangelos Marinakis, Angeliki Frangou and ION S.A. ready for use
SYRIZA in fact was not so eager to create a common front with the left Editorial: Political flirt
It is not too much to ask our political parties to adapt to the new realities Editorial: Time to build consensus
Any back-pedaling on the public health restrictions that have been imposed would be catastrophic Editorial: No to complacency!
Politicians can visit the historic Athens Polytechnic campus to leave a flower, as the PM suggested, or to lay a wreath as the main opposition leader proposed. Editorial: The cost
Perhaps the government could have handled the matter earlier and differently Editorial: Lives must be saved
We must deprive Turkey of its strongest weapon – the element of surprise Editorial: Equation
It is by now clear that Tsipras and Polakis are one and the same politically Editorial: Political cover
The only way to deter a disaster from the second wave of the virus is to get a vaccine and religiously comply with restrictive measures Editorial: Deterrence
There is an urgent need to strictly enforce the lockdown Editorial: Behaviours
As COVID-19 cases soar Greece announces three weeks nationwide lockdown
The freedom to disseminate applies to ideas and not the distribution of drugs Editorial: Breaking taboos