Kotzias: Greece at centre of triangle of instability: Ukraine, Libya, and Iraq,

Kotzias expects a successful conclusion of negotiations with Albania on 10 bilateral issues, including the delineation of the two countries’ Exclusive Economic Zones. (EEZ). 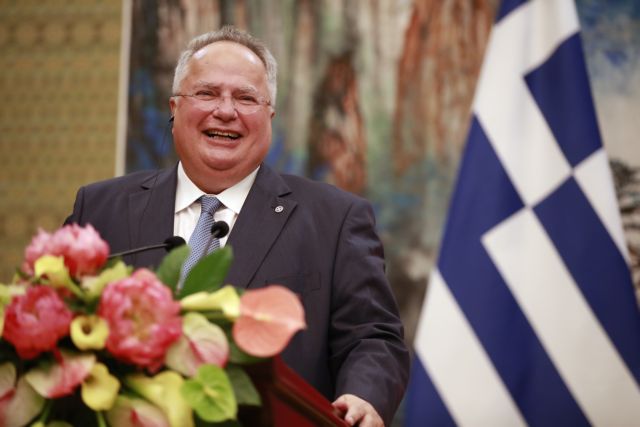 Foreign Minister Nikos Kotzias stressed the need for Balkan cooperation and denied that the Greece-FYROM naming accord was the product of external pressues, in a speech to the Norwegian Institute of International Affairs (NUI), where he said that Greece is at the centre of a triangle of instability.

Kotzias said that the agreement is “the epitome of a structured and just compromise in the region”, which is a source of inspiration for regional countries which are confronted by longstanding disputes.

Kotzias expressed confidence that there will be a successful conclusion of negotiations with Albania on a series of 10 bilateral issues, including the delineation of the two countries’ Exclusive Economic Zones. (EEZ).

In a speech entitled “Principles of Greek Foreign Policy: Stressing Stability in Southeastern Europe”, Kotzias outlined the framework of a policy bases on “peace, smart power, and dialogue”.

Kotzias said Greece’s interests are to a large extent linked to the Balkans, due to the size of the region’s economy, its human capital and its infrastructure, elements which are necessary for the economic development of the entire region.

“We must play a leading role in establishing a culture of compromise and consensus between the countries of the region,” he said.

Kotzias said that Greece finds itself at the centre of a triangle of instability: Ukraine, Libya, and Iraq, and that this necessitates a policy of “flexibility and adaptability”.

TANEA Team 10 Σεπτεμβρίου 2018 | 22:56
Share
Δείτε επίσης
Περισσότερα άρθρα για Αγγλική έκδοση
Greece’s role as an energy hub must be emphasised Editorial: Opportunities
Mitsotakis-Biden talks: Greek-Turkish relations, the war in Ukraine, wayward Turkey’s new role in NATO
It is not in Greece’s interest for Turkey to be isolated or humiliated Editorial: Opportunity
The Marshall Plan prioritised rebuilding export capacity How should a Marshall Plan for Ukraine work?
Drop in COVID-19 deaths - number of infections, intubated patients stable, hospital admissions rise
Policing of universities is an unpleasant but necessary measure Editorial: No excuse
A strict price inspections policy is needed to curb untrammelled price hikes Editorial: Dealing with inflation
Editorial: Axes
Ta Nea has repeatedly called for decisive action Editorial: University police force plan on the back burner
Everything depends on how the social media are used Editorial: Words
SYRIZA’s gains in 2012 were a Pyrrhic victory. Editorial: Populism
There will be a 600 euro cap on the rebate Amidst uproar over skyrocketing energy costs, Mitsotakis announces rebates for households
This is the 12th anniversary of the deadly arson attack Editorial: Radio silence
Many cases involving extremely serious crimes have not been tried Editorial: A bitter political legacy
EODY has recorded a total of 3.34mn COVID-19 infections EODY: 32 COVID-related deaths, over 8,000 infections, 660 reinfections, 231 intubated patients