Supreme US, Greek military leaders meet in Athens amidst crisis in US-Turkey relations

The fact that the Chairman of the Joint Chiefs of Staff is visiting Greece in a period in which US-Turkey relations have reached their nadir, naturally without a stopover in Turkey, has been viewed by some as another clear message to Ankara. 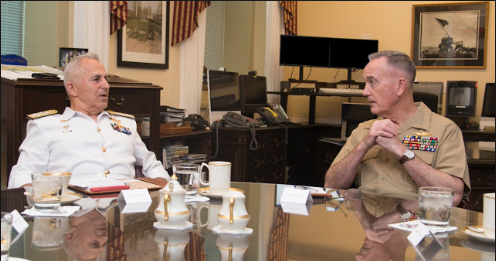 American General Joseph Dunford, the Chairman of the Joint Chiefs of Staff and America's supreme military officer, is on a visit to Athens today, for talks with his Greek counterpart, Admiral Evangelos Apostolakis.

The US Embassy in Athens welcomed the General with a short video of his arrival and the title «Καλώς ήρθατε», which means welcome in Greek.

The visit comes just four days before the start of the Thessaloniki International Festival, where the US is the honoured country this year.

The fact that Dunford is visiting Greece in a period in which US-Turkey relations have reached their nadir, naturally without a stopover in Turkey, has been viewed by some as another clear message to Ankara.

At the moment, US-Greece relations, including an ever closer military cooperation, are at an excellent level, even as US-Turkey relations are in an unprecedented crisis.

As the US Embassy in Athens underscored, General Dunford’s visit aims to explore ways to broaden cooperation on security with Nato ally Greece.

Among the issues to be discussed by General Dunford and Admiral Apostolakis are the US base in Souda, Crete, and Greece’s role as a pillar of stability in the Mediterranean, where Cyprus’ gas and oil drilling has caused heightened tensions between Nicosia and Ankara, which has made its presence felt with Turkish warships in Cyprus’ Exclusive Economic Zone and Ankara’s plans to drill illegally in Cyprus’ EEZ.

Admiral Apostolakis Athens Visit Chairman of the Joint Chiefs of Staff General Dunford US-Greece Relations US-Turkey relations 4 Σεπτεμβρίου 2018 | 19:55
Share
Περισσότερα άρθρα για Αγγλική έκδοση
Editorial: Feat
For long overdue town planning reform to succeed, we must all actively cooperate Editorial: We must not forget the Mati disaster
Editorial: The 'most complex' Games
Editorial: Proud
The first Mercure in Greece, opens its doors in Rhodes
Greek-Italian “tourism conflict”
In Turkish-occupied Cyprus, Erdogan unleashed an attack against Prime Minister Kyriakos Mitsotakis Editorial: Erdogan's provocations
'Kosova wants to build on the historic ties between our peoples ' Kosovo PM Albin Kurti: 'We would welcome a decision by Greece to recognise Kosovo’s independence'
Demonstrating the conspiracy against Stavros Papastavrou
Citizens will be encouraged to buy new, climate-friendly cars Editorial: Green
Mitsotakis: Vaccinations are increasing in recent weeks – What Breton told him
One must take into account that we have strong allies on the other side of the Atlantic Editorial: Fronts
The shooting of the international television production “My Greek Odyssey” on Ios
Alexandroupolis as ‘new Souda’: US, Greece near agreement on bases – what the US wants, what Athens seeks
A political understanding and consensus are needed in order to speed up the vaccine rollout Editorial: The urgent need for political consensus on vaccines, managing pandemic