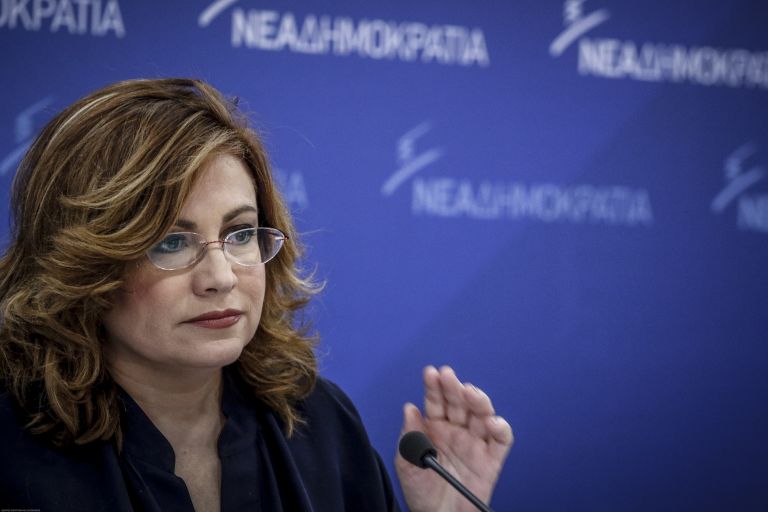 Spyraki said that a news conference yesterday held by the public order minister and the chiefs of Greek police and the Fire Service was a display of tremendous audacity.

“In yesterday’s governmental performance, designed to shirk responsibility, there was not a single apology. No one of those involved has been fired. On the contrary, they all said they were proud of how well they did their job, even as we count the dead,” Spyraki said.

New Democracy posed the following questions, pertaining to prevention and managing the crisis:

“Firstly, why, as the Fire Service chief conceded, were there not adequate forces before the fire broke out? Everyone knew it would be the most difficult day since the start of summer as regards the likelihood of a wildfire in Eastern Attica. The danger level was level 4.

Secondly, why was an order not issued for the immediate evacuation of Mati when, as the government now admits, there was enough time and the direction of the fire was predictable?

Thirdly, why did the emergency telephone number 112, which can send a message to anyone with a cell phone in an endangered zone, not operate?

Fourthly, why did the government not turn to the media to warn residents that they should evacuate their homes?

Fifthly, based on what plan was the rescue of people who had fallen into the sea conducted?

Sixthly, based on what plan and what order, while the fire was spreading, were dozens of cars debarking in Rafina, and based on what rationale were they directed from Marathonos Avenue to Mati?

Seventhly, how is it possible when already at 8:15pm the magnitude of the disaster was known, for the top brass to assure the PM in front of the cameras that the fire has been contained, when dozens of people had already died?

TANEA Team 27 Ιουλίου 2018 | 22:57
Share
Περισσότερα άρθρα για Αγγλική έκδοση
The further deepening of Greece-France relations is exceptionally positive Editorial: Mutual assistance, European defence
Mitsotakis, Macron announce mutual defence pact, Greece's procurement of French frigates
Greece-France sign mutual defence pact, major arms procurement deal
The pain and agony of the families cannot be softened, but the state can make amends Editorial: Everything must come to light
Earthquake in Crete – Tents are set up for 2,500 people who were left homeless – The area is in a state of emergency
Editorial: Turning a page
'This is no longer about climate change. This is about addressing a climate crisis.' Mitsotakis focuses on pandemic, climate crisis, and Greek-Turkish relations in UN speech
The head of SYRIZA’s Citizen’s Protection policy section simply followed his party’s mannerism Editorial: Mannerism
The cottage industry of lawsuits against educators constitutes a disruption of social peace Editorial: Decisiveness
For the Ecumenical Patriarchate, which has spiritual authority over the Church in America, Elpidophoros, 54, is the best and the brightest that it has to offer. Tempest in a teapot: The attacks on Archbishop Elpidophoros and foreign policy stunts
US President Joe Biden has chosen a particular mixture of policies Editorial: Doctrines
Approximately 160,000 people in Greece today are afflicted with Alzheimer’s disease Editorial: Reminder
Unrepentant, Tsipras unleashed charges against the government and announced handouts Editorial: A return to the past
The country is in great need of stability., not electoral surprises Editorial: Normalcy
The EU’s adjustment of financial rules has facilitated the situation Editorial: Lessons