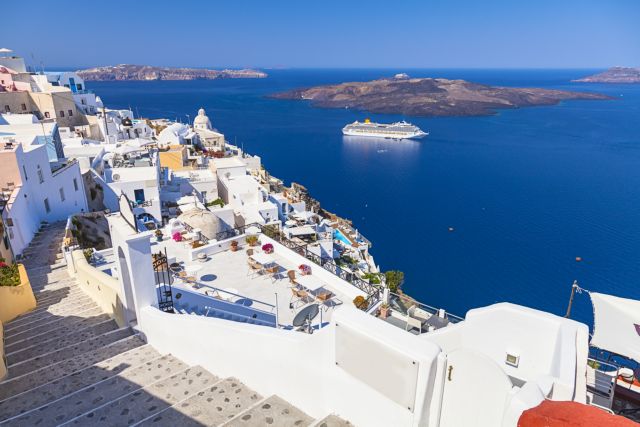 With bookings until mid-September showing particular momentum in almost all of the major popular tourist destinations, Greece is very close to winning this year’s “bet”: To achieve, that is, the goal of 50% of tourism revenue compared to 2019 arrivals, which was an all time record year!

The tourism “boom” in July and August in combination with the double-digit GDP growth in the second quarter of the year after the end of quarantine create reasonable expectations that in 2021 the Greek economy will achieve a strong recovery rate, despite the shock caused by catastrophic fires and the enormous damage caused to the environment and the economy of Northern Evia.

In the same quarter, GDP growth amounted to 2%, compared to the first quarter of 2021 as the economy was already showing signs of recovery (ELSTAT data will be announced in early September before the Thessaloniki International Fair.)

The tourist traffic on the islands and in the popular destinations is something more than expected. The occupancy of the hotel units from 22 to 31 August is estimated to be maintained at an average of 80%. Thus, Crete, Rhodes, Kos, Corfu, Cephalonia, Lefkada and Halkidiki, but also islands of the Cyclades and the Sporades, are preparing to enter September dynamically.

Tourist factors typically report that by August 22, most units are fully booked by foreign and Greek tourists, while by the end of the month the occupancy is stabilizing at around 80%. They also note that “in the last few days there is a dynamic in bookings from abroad”, which will last at least until the first fortnight of September.

August, according to hoteliers, was much better than initially expected, which helped tourism businesses “take a deep breath”, covering part of the financial losses caused by the pandemic since its emergence.

It is noted that based on the latest Eurocontrol data, Athens International Airport (AIA) is one of the ten airports that served on average the most arrivals and departures per day, between 5 and 15 August.

In particular, “Eleftherios Venizelos” has the second smallest drop of 15% in terms of the number of flights compared to the same period of 2019, when some of the most crucial air transport hubs in Europe, such as Frankfurt and Madrid airports , Paris and Amsterdam, recorded reductions ranging between 28% and 37%.

Unless there are serious surprises on the pandemic front, tourism officials estimate that at the end of the season Greek tourism will be able to achieve revenues of 8-9 billion euros (compared to 18.2 billion euros, which was revenue in 2019).

“The course of Greek tourism from June until now is evolving according to the most positive scenario. Our main concern now must be the continuation of the operation of the hotels in September and October. This can be done only by observing the measures against Covid-19 and the increase of vaccinations “, notes the president of the Association of Greek Tourist Enterprises (SETE), Giannis Retsos.

Greece “winner” in the recovery struggle

According to a study by the international organization OAG, despite the fact that the seats on the flights scheduled for August in Europe were reduced by 31% compared to the corresponding month of 2019, on the routes to Greece the traffic in August is recorded increased by 2 %, exceeding pre-coronavirus levels! It is noted that the planned seats on incoming international flights last week reached 841,000 – the highest number since the beginning of this tourist season.

At the same time, a big drop is observed in other popular European tourist destinations, such as Spain, as the corresponding seats on flights are reduced by 25%.

Meanwhile, according to Fraport Greece, which manages the country’s 14 largest airports (excluding Athens), in the seven months the total number of transported passengers amounted to 6,015,197, compared to 3,090,390 in the corresponding period of 2020 (increase of 94.6%). “Greece’s constant messages that the country remains open to tourism seem to be bearing fruit,” commented aviation officials.

This year, the Greek tourism industry again relied mainly on the arrivals of tourists from abroad. A model that was developed with great success from the beginning of the last decade and was the “antidote” to the economic crisis of the country as a whole for the Greek economy.

However, last year, when the number of tourists from abroad decreased by 75%, the situation was saved in many areas by Greek tourists, whose travel decreased by only 21.9% compared to 2019.

According to the data of the Hellenic Statistical Authority, in 2020 Greeks of all ages who made at least one trip amounted to 3.8 million, while 5.8 million trips were made, recording a decrease of 17.7% and 21.9%, respectively, compared to the data of 2019. This year they will exceed the trips of 2019.

Tourism is driving growth as estimates show that revenue this year could reach 60% in 2019, up from 45% forecast by the finance staff.

According to information, already in the Ministry of Finance, in the General Accounting Office of the State, they are rewriting the budget, raising this year’s target for GDP above 4%, from the initial estimate which was at 3.6%.

TANEA Team 26 Αυγούστου 2021 | 10:13
Share
Περισσότερα άρθρα για Αγγλική έκδοση
Editorial: Turning a page
'This is no longer about climate change. This is about addressing a climate crisis.' Mitsotakis focuses on pandemic, climate crisis, and Greek-Turkish relations in UN speech
The head of SYRIZA’s Citizen’s Protection policy section simply followed his party’s mannerism Editorial: Mannerism
The cottage industry of lawsuits against educators constitutes a disruption of social peace Editorial: Decisiveness
For the Ecumenical Patriarchate, which has spiritual authority over the Church in America, Elpidophoros, 54, is the best and the brightest that it has to offer. Tempest in a teapot: The attacks on Archbishop Elpidophoros and foreign policy stunts
US President Joe Biden has chosen a particular mixture of policies Editorial: Doctrines
Approximately 160,000 people in Greece today are afflicted with Alzheimer’s disease Editorial: Reminder
Unrepentant, Tsipras unleashed charges against the government and announced handouts Editorial: A return to the past
The country is in great need of stability., not electoral surprises Editorial: Normalcy
The EU’s adjustment of financial rules has facilitated the situation Editorial: Lessons
Editorial: The conundrum of early elections
It is common knowledge that all political parties seek the vote of Greece’s youth Editorial: Greece’s youth
In a democracy, elections cannot serve as a weapon for prime ministers Editorial: The need for electoral stability
Mitsotakis rules out any prospect of political consensus with SYRIZA
Merkel’s statement should lead us collectively to a rethinking of what happened and not reflexive indignation Editorial: The price of imprudent politics