Editorial: Pay back with the same coin

The ruling party is beginning to pay the price that other parties paid when SYRIZA in order toremain in power recruited renegade MPs. 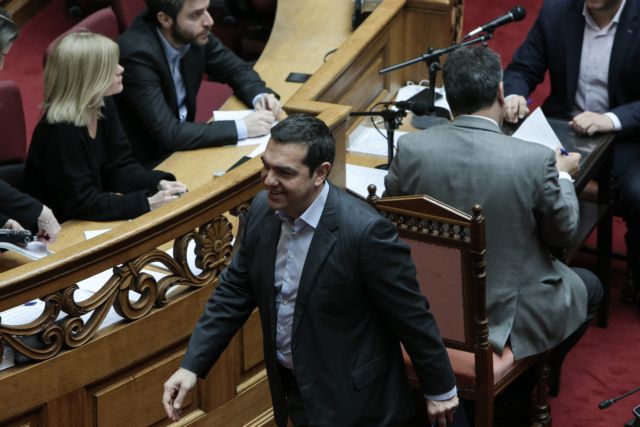 The government seems to have been delighted by the outcome of the parliamentary votes on which articles of the Greek Constitution will be amended after the next general election.

It appeared with a triumphant air of artificial euphoria in an effort to once again to skew reality.

The reality is that a number of SYRIZA MPs voted down the government’s proposed amendment of Article 3 of the Constitution (which deals with church-state relations) to include a declaration of the state’s religious neutrality, which garnered a majority anyway.

The second blow was the rejection of SYRIZA’s proposal that the President of the Republic be elected by popular vote if there is a deadlock in Parliament because no candidate garners the requisite majority in successive votes.

The government may try to brush that aside, but it is clear that there is a lack of cohesion in the ruling party’s parliamentary group. That means that the six non-SYRIZA MPs who have unconditionally agreed to support the government in passing all draft legislation, thus ensuring its parliamentary majority, may not be enough to cement that majority, which will from now on depend on the choices of Mr. Tsipras’ own MPs.

The ruling party is beginning to pay the price that other parties paid when SYRIZA in order toremain in power recruited renegade MPs from the Independent Greeks (which until then was SYRIZA’s junior coalition partner) and To Potami.

In this manner, it encouraged a mentality of loose party loyalty. Now it is being paid back with the same coin.

TANEA Team 15 Φεβρουαρίου 2019 | 19:58
Share
Δείτε επίσης
Περισσότερα άρθρα για Αγγλική έκδοση
Editorial: Audits of politicians' wealth
Mario Draghi has a prominent position in the EU architecture Editorial: Alliance
After a certain point, the necessary caution is a matter of personal responsibility Editorial: COVID-19 and personal responsibility
Extremists still constitute a threat Editorial: Threat
A consciously responsible stance is needed Editorial: Maintaining COVID-19 alertness
The late PM Constantine Karamanlis famously said, 'We belong to the West' Editorial: Contradictions
The end of EU enhanced fiscal supervision signals the exit from the tunnel Editorial: Breakthroughs
Head of Greek Pomaks’ Association rips into Erdogan’s revisionist expansionism
All Greek governments since Andreas Papandreou's demanded the return of the Marbles Osborne: ‘Deal to be done’ on sharing Parthenon Marbles
All efforts toward a radical resolution of the refugee problem have failed Editorial: The end does not justify the means
France's centrist forces are rallying behind President Emmanuel Macron Editorial: The political centre
The Germans are returning, this time not to impose their will but to cooperate Editorial: Greece as a bridge between Western Balkans, EU
The demographic crisis must be managed swiftly Editorial: Demographic crisis
There was a Jewish presence in Thessaloniki even in antiquity, and the Apostle Paul preached in its synagogue Leon Saltiel: Glimmers of hope in battling Greek antisemitism
Investment will also play a pivotal role Editorial: The dynamic of the Greek economy