The aim of the SYRIZA-Independent Greeks government is clear. It wants to win over as many social groups and strata as possible so as to avert an electoral trouncing. 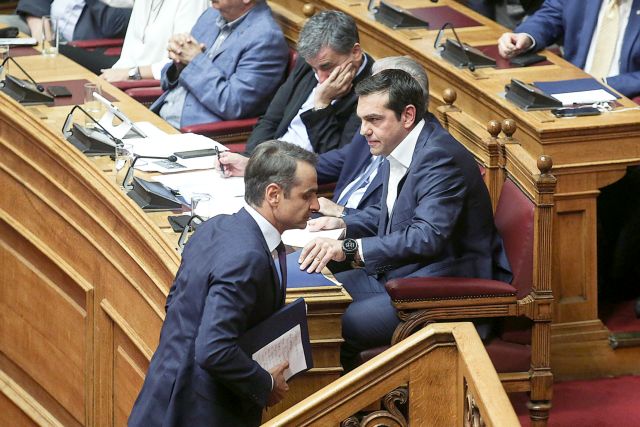 If one were to say that this is the first time there have been frenzied pledges of handouts one could fairly be accused of cheap opposition.

Rampant pledges ahead of elections are a familiar feature of Greek politics. However, it is the first time that they are advertised as left-wing.

The aim of the SYRIZA-Independent Greeks government is clear. It wants to win over as many social groups and strata as possible so as to avert an electoral trouncing.  That is why it made the return of benefits that had been cut (ordered by the judiciary) and the avoidance of pension cuts its banner. Indeed, it attempted to exploit that “success” in order to attack the opposition and reap petty partisan gains.

Of course, no one would like fresh, horizontal pension cuts, but there are no money trees. The government is taking the money it will put in the pockets on pensioners and uniformed officers from some other pockets.

In order to reach a 3.9 percent primary surplus, the government has over-taxed the middle class. The distribution of hundreds of millions of euros in handouts is depriving the Public Investment Programme of funding.

Growth and reforms are being sacrificed for the sake of elections. That is the underlying reality of the budget that was tabled in parliament yesterday. The European Commission approved it because it wants to swiftly close the Greek front. However, it also underlined delays in implementing reforms, stressing that agreed structural reforms must be implemented in order for agreed debt relief measures to be activated.

Hence, there is no cause for celebration. As the Hellenic Federation of Enterprises (SEV) has noted, there is a serious danger of the economy becoming entrapped in a quagmire. Greece, however, does not have the luxury of wasting any more time.

TANEA Team 22 Νοεμβρίου 2018 | 13:36
Share
Δείτε επίσης
Περισσότερα άρθρα για Αγγλική έκδοση
Editorial: Audits of politicians' wealth
Mario Draghi has a prominent position in the EU architecture Editorial: Alliance
After a certain point, the necessary caution is a matter of personal responsibility Editorial: COVID-19 and personal responsibility
Extremists still constitute a threat Editorial: Threat
A consciously responsible stance is needed Editorial: Maintaining COVID-19 alertness
The late PM Constantine Karamanlis famously said, 'We belong to the West' Editorial: Contradictions
The end of EU enhanced fiscal supervision signals the exit from the tunnel Editorial: Breakthroughs
Head of Greek Pomaks’ Association rips into Erdogan’s revisionist expansionism
All Greek governments since Andreas Papandreou's demanded the return of the Marbles Osborne: ‘Deal to be done’ on sharing Parthenon Marbles
All efforts toward a radical resolution of the refugee problem have failed Editorial: The end does not justify the means
France's centrist forces are rallying behind President Emmanuel Macron Editorial: The political centre
The Germans are returning, this time not to impose their will but to cooperate Editorial: Greece as a bridge between Western Balkans, EU
The demographic crisis must be managed swiftly Editorial: Demographic crisis
There was a Jewish presence in Thessaloniki even in antiquity, and the Apostle Paul preached in its synagogue Leon Saltiel: Glimmers of hope in battling Greek antisemitism
Investment will also play a pivotal role Editorial: The dynamic of the Greek economy