'There is great pressure at the Evros border. At the same time, direct communications on site between the Greek and Turkish sides has been cut off, further aggravating the problem,' said one Greek public order ministry official. 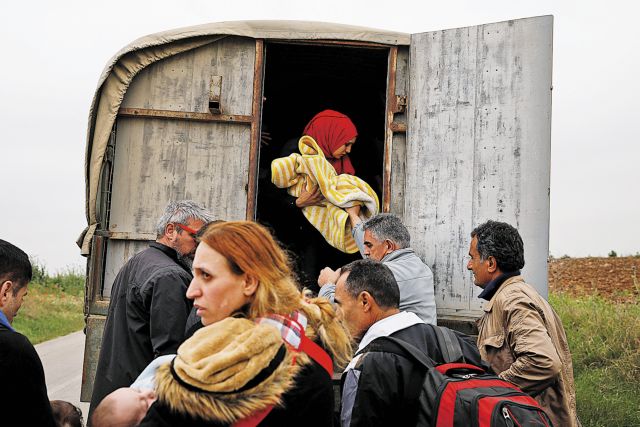 Greek authorities have charged that Ankara has loosened border controls at the Greek-Turkish land border in the Evros region, leading to a major leap in the number of migrants entering Greece.

Athens has filed complaints with both Ankara and Brussels.

“There is great pressure at the Evros border. At the same time, direct communications on site between the Greek and Turkish sides has been cut off, further aggravating the problem,” one Greek Citizen’s Protection Ministry (public order) official told the daily Kathimerini, attributing the great increase of the number of migrants entering Greece via Evros to that situation.

The report said that Athens has lodged complaints with both the EU and Turkey, in a bid to secure a tighter border, and that a representative of the European Commission visited Ankara in order to raise the issue with Turkish authorities.

Meanwhile, the Citizen’s Protection Ministry is concerned about information indicating that 500,000 Afghan nationals have migrated to Turkey from Iran and Iraq, which has fueled concerns about a prospective increase of pressure at Greece’s northern borders.

The increased activity of rings transporting migrants is revealed in the data on Greek Police arrests over recent months.

Between January and August, 2018, Greek Police arrested 1,010 human smugglers. In September, 180 were arrested, and another 30 in the first week of October.

To Twitter «τσεκάρει» Τραμπ για παραπλανητικές ειδήσεις – Οργισμένη αντίδραση του προέδρου των ΗΠΑ
12.000 Migrants 500.000 Afghan Nationals Citizen's Protection Ministry Evros Greek Police Arrests Greek-Turkish Border Twelve Thousand Migrants 9 Οκτωβρίου 2018 | 16:26
Share
Δείτε επίσης
Περισσότερα άρθρα για Αγγλική έκδοση
Editorial: Opposition
French crisis measures have cost 450 bln euros, finance minister says
Euro zone bond yields steady; focus remains on recovery fund
Until when does Mr. Melissanidis think that he can set the ‘rules of the game’?
Greek A-team in the coronavirus battle: Mount Sinai's Antonis Charokopos
Editorial: Challenges
Ta Nea today presents the Athens Municipality plan which is daring but must also be functional Editorial: The Greek capital
Editorial: Recognition
Editorial: A lesson of life
An economic restart is inconceivable with a drop in the employment rate Editorial: Tools
Over 250,000 jobs are expected to be lost Editorial: Standing
It means mutual respect and trust between state, citizens Editorial: A new social contract
The NHS was and in many way remains the sick man of the Greek state Editorial: Pride and joy
Ambassador Op-Ed for Ta Nea The U.S. and Greece: Partners in the Pandemic and the Day After
Now there is no excuse for any delay and the pandemic proved that Editorial: Cogwheels