Moscovici on bailout: 'When you're out, you're out'

In an interview with the daily TA NEA, European Economy and Finance Commissioner Pierre Moscovici says that Greece will have significant leeway in determining its own fiscal policies after the end of the current bailout programme, as long as those policies honour the existing commitments 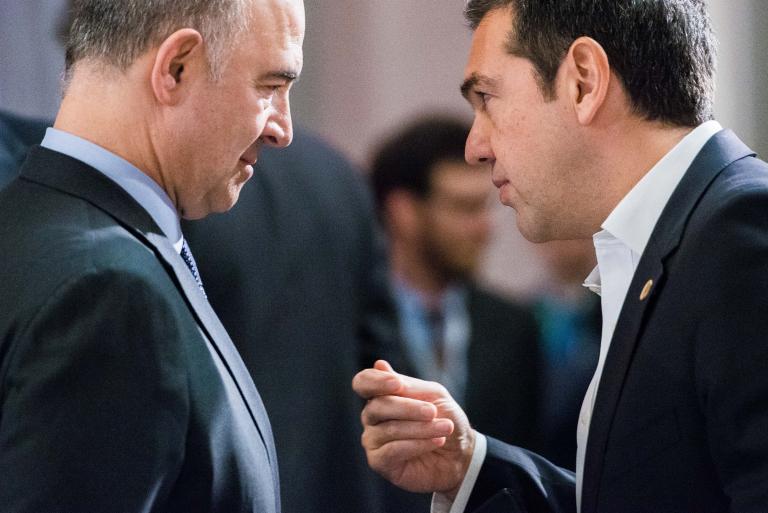 In an interview with the daily TA NEA, European Economy and Finance Commissioner Pierre Moscovici says that Greece will have significant leeway in determining its own fiscal policies after the end of the current bailout programme, as long as those policies honour the existing commitments that Athens has made to creditors, including pension cuts and reduction of non-taxable income levels.

In a spate of interviews granted during his two-day visit to Athens, Moscovici appears to be supporting the government’s narrative about a clean exit (he prefers the word completion) from the fiscal adjustment programme, repeating that “When you are in you are in, and when you’re out you’re out.”

The final decisions about the form of post-bailout supervision, and about the form and timetable for debt relief, will be taken at a 21 June Eurogroup meeting, he said.

Moscovici, however, prefers to focus on the loose ends of the current bailout evaluation and the preconditions for finishing the fourth one, which he said will not be as demanding.

While Greece is to return to the European Semesters oversight scheme that applies to EU countries more generally, Athens – like former bailout memorandum countries Cyprus, Portugal and Ireland – will be subjected to an additional supervisory scheme that will dovetail with a home-made Greek development programme, which Finance Minister Euclid Tsakalotos recently said will be tabled in the spring.

“I am speaking of a suitable post-programme oversight, which must ensure on the one hand that Greek authorities are free to make their choices, and on the other that the commitments that Greeks have undertaken will be implemented,” Moscovici told reporter Angelos Athanasopoulos.

This Greek-owned programme should be drafted in conjunction with the country’s economic establishment, so as to meet challenges such dealing with non-performing loans, attracting investment, luring back the finest human capital that has emigrated, so as to ensure viable growth in the medium-to-long term.

Moscovici supported the French proposal to link Greece’s medium-term debt relief to the rate of the country’s economic growth, and he suggested that the Eurogroup has been receptive to the idea.

The European Commission and the European Stability Mechanism with play the predominant role, and the ECB and the IMF (if it remains on board) lesser ones, in the post-bailout era, Moscovici underlined.

TANEA Team 9 Φεβρουαρίου 2018 | 14:47
Share
Περισσότερα άρθρα για Αγγλική έκδοση
This young woman heard the message of other women that preceded her Editorial: Catharsis
Balances with the Russian side are very delicate and must be maintained Editorial: Composure
'Greece is a significant and wise actor in this part of Europe' Kosovo FM Donika Gervalla–Schwarz: ‘We are not begging for recognition from Greece’
People want answers, persuasive plans, and arguments Editorial: Maturation
The pandemic and citizens’ fears regarding inflation have shocked households Metron Analysis poll: SYRIZA trails New Democracy, KINAL-PASOK skyrockets
It is imperative for the weapons programme to be implemented immediately Editorial: Arrivals
The charges of the victim garnered attention nationwide Editorial: Support
Greece is a peaceful Western country Editorial: Vigilance
Both SYRIZA and PASOK are in a transitional phase Editorial: Changes
Tsipras posts on the social media and frequently as possible Editorial: Obligations
Universities have become a sort of state within the state Editorial: Enough is enough!
Nobody for whatever reason has the right to beat a professor Editorial: Zero tolerance
The shift in America’s priorities should come as no surprise Editorial: Fluidity
We have the weapons, the experience, and obviously the collective will Editorial: Transcending the pandemic
How do you negotiate with Vladimir Putin? Editorial: Dilemma